Much has been said about King John, and he is frequently named as Bad King John, although it has to be said it was John who granted various concessions to Lynn, and indeed its charter. But there was among his grants one which, albeit several hundred years later, caused an acrimonious dispute. This is mentioned in the King’s Lynn Borough Archive indices as the Newcastle Suit.

Among the records held by the Archive, there is an interesting body of uncatalogued documents listed under the temporary reference BL. It consists of various legal items, including BL 9, a case put by the Mayor and Burgesses of Lynn against their counterparts in Newcastle, many sheets of depositions and an account of the legal proceedings- the Newcastle Suit.

It could be seen as over generosity on John’s part, sheer carelessness, or a mixture of both, but he did grant to Lynn “an exemption of tolls and customs throughout the realm”. It was this privilege which was cited in 1608 in the introductory document of the Suit. 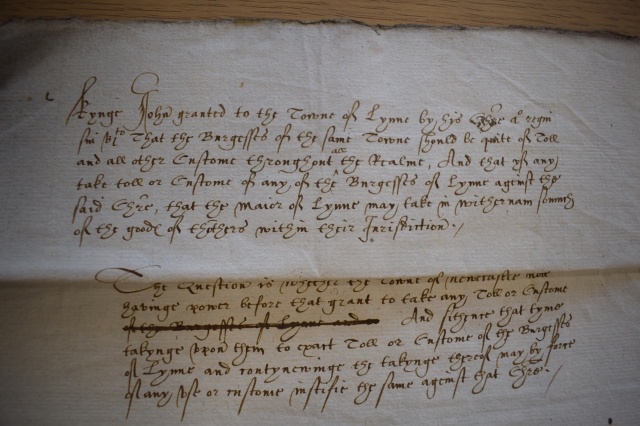 The introductory document of the Newcastle Suit. KLBA, BL 9.

This document then sets out the case against Newcastle, that they are illegally charging tolls on coal exports to King’s Lynn: 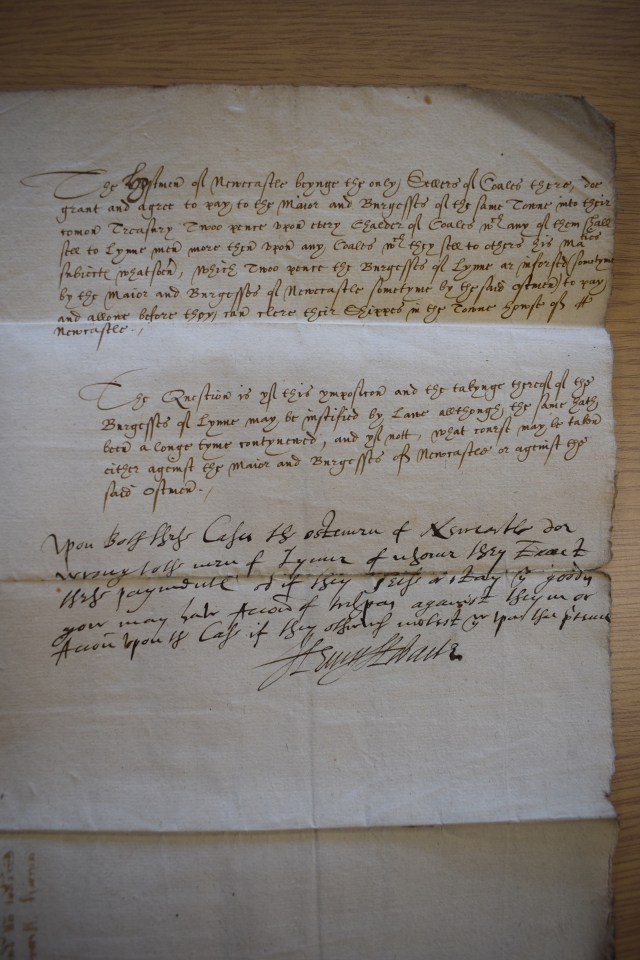 The case against Newcastle, that they are illegally charging tolls on coal exports to King’s Lynn. KLBA, BL 9.

The problem arose when this was used to challenge the imposition of a levy per chaldron (i.e. wagon load) of coal by the Hostmen of Newcastle who in turn quoted the privilege John had granted them to impose tolls on coal, also “throughout the realm”.

Coal had been an important export item since the 13th century, and until the Reformation the industry was under the control of the monasteries, which limited production in order to keep prices high. But once the Church lost control, it became a free-for-all, with production increasing 10- or even at times 20-fold. The Hostmen of Newcastle were a group of entrepreneurs, referred to as Merchant Adventurers, like the sponsors of the Bedford Levels (discussed in Carrying Coals to King’s Lynn), who over time, by means not always totally legal, had managed to bring the export of coal under their monopoly.

The dispute arose when they tried to charge the authorised 2d (as in old pence) per chaldron when it had already been charged by the Corporation. Documentation obtained from the Tyne & Wear Archives points out that

“It appears that the mayor and burgesses of King’s Lynn were the complainants.”

This was not the first communication there had been, though, as the entry for May 1586 in the King’s Lynn Hall Book KL/C 7/7, f318 reports that

“reply was made to a letter from Newcastle”. 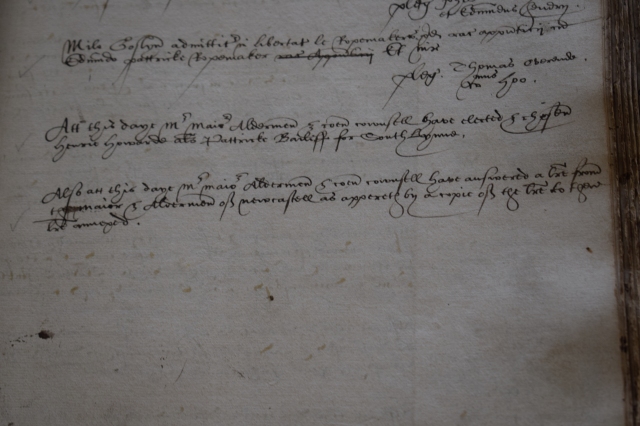 King’s Lynn had representatives in Newcastle and London, to pursue the case, and there is a reference to our man in London appearing before the judge “to appraise”:

Various mentions are made of expenses being granted, or requirements to report back, and one interesting one contains an instruction to bring back an “indentured document concerning the suit between King’s Lynn and Newcastle” and goes on to make reference to Newcastle Corporation and the Hostmen. An indentured document was originally a legal document, written out in duplicate; one edge of each document was cut with dents- i.e. indentured. These indentures would match, allowing the documents to fit together as proof they were genuine. We have already met indentured documents in the story of the Bedford Levels – Carrying Coals to King’s Lynn. 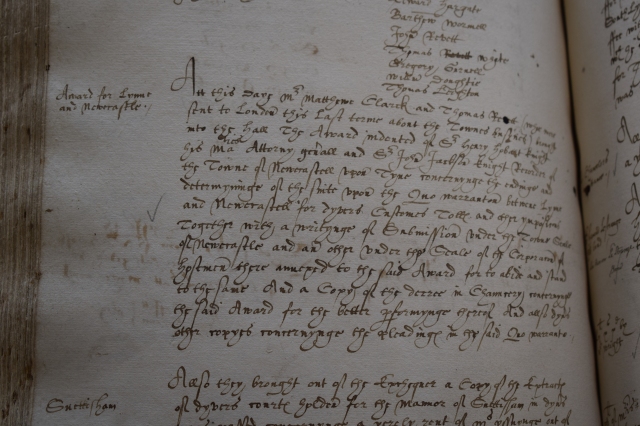 As referred to above, BL9 contains lists of depositions and accounts of legal proceedings. These depositions were taken at various places in the area:

This list is specified as taken in King’s Lynn. KLBA, BL 9.

It would appear that it was not only King’s Lynn complaining. The documentation cited above also states that:

“In the Aubone MS, quoted by Brand (ii.-275), it is stated that in the 5th James I a quo warranto was brought against the Mayor and burgesses of Newcastle, and also against the Hostmen”.

In the online Free Dictionary by Farlex, the legal dictionary tells us that a quo warranto is: A legal proceeding during which an individual’s right to hold an office or governmental privilege is challenged.

It goes on to say that:

In old English practice, the writ of quo warranto—an order issued by authority of the king—was one of the most ancient and important writs. It has not, however, been used for centuries, since the procedure and effect of the judgment were so impractical.

Currently the former procedure has been replaced by an information in the nature of a quo warranto, an extraordinary remedy by which a prosecuting attorney, who represents the public at large, challenges someone who has usurped a public office or someone who, through abuse or neglect, has forfeited an office to which she was entitled. In spite of the fact that the remedy of quo warranto is pursued by a prosecuting attorney in a majority of jurisdictions, it is ordinarily regarded as a civil rather than criminal action. Quo warranto is often the only proper legal remedy; however, the legislature can enact legislation or provide other forms of relief.

If the writ was issued by authority of the King, things are getting serious! On July 10th, 1610 among the numerous grievances discussed by the House of Commons was the imposition, a committee was appointed, and a report sent to the King.

The dispute went on for years. Wikipedia tells us that:

“In 1637 Charles I, in an attempt to raise revenue, doubled the tax on Tyneside coal in return for allowing the Hostmen to regulate production and set the price of coal. The London coal importers and the East Anglian ship owners were outraged, and resolved to boycott Tyneside coal. As a result, the price of coal rose and the royal revenues dropped. Charles was forced to cancel the Hostmen’s monopoly.”

The Civil War and various Scots incursions diverted attention for a time, but it was not until 1750, when increased production meant that non-Hostmen businessmen gained a foothold, that the stranglehold of the Hostmen was broken.

A not entirely relevant but whimsically interesting tail piece in the Wikipedia account is a list of Governors of the Hostmen from 1600 to 1800. From 1655 to 1659, the Governor was a certain Robert Shafto, who was Sheriff of Northumberland in 1653. However, this was not the lad who went to sea, with silver buckles on his knee, but his uncle. As Wikipedia tells us:

Robert Shafto was born around 1732 the son of John Shafto and his wife Mary Jackson, daughter of Thomas Jackson of Nunnington, Yorkshire at his family seat of Whitworth near Spennymoor in County Durham. He was educated at Westminster School from 1740 to 1749, when he entered Balliol College, Oxford.

He succeeded to the family estates on the death of his father John in 1742. Both his father and uncle Robert Shafto had been Tory Members of Parliament. He continued this tradition, becoming one of the two members for County Durham in 1760, using his nickname “Bonny Bobby Shafto” and the now famous song for electioneering purposes, defeating the Whig Sir Thomas Clavering, with a campaign supported by Thomas Pelham-Holles, Duke of Newcastle, who was the prime minister, Henry Vane, first earl of Darlington, and the bishop of Durham. However, once in parliament he dropped this allegiance, supporting the administrations of John Stuart, 3rd Earl of Bute and Pitt the elder. He held the County Durham seat for two parliaments until he declined to stand in the election of 1768.