Norfolk’s ‘Downton Abbeys’, and recruiting for below stairs

With the Downton Abbey movie released in September 2019, and the relationship of masters and servants vividly brought to life on the big screen, it was with interest that I reflected on the experiences of Rachel Ketton of Norfolk’s Felbrigg Hall, whose diaries are held by The National Trust. Rachel was Mistress from 1863 until her death in 1885. Through the single lines of daily reflection, Rachel’s 1860s diaries create a window into the past and give life to some of those who worked and lived below stairs.In reading Rachel’s diaries, I have met Norris the Butler, who stated that he would ‘rather buy a broom and sweep a crossing than lead the life he had done’. He ‘accidentally’ locked one of Rachel’s daughters in the ‘water closet’ overnight until released by a maidservant the next morning. And when challenged about the quantity of coal he was ordering, stated that Mr Ketton might ‘cook his own dinner and wash his own shirt’. After two years of service, he was given notice to leave but got his revenge by digging up ‘his plants’ from the greenhouse and taking ‘his’ easy chair with him. Norris seems quite a contrast to Downton’s stern but loyal Butler, Carson.

That is not to say that the Ketton’s did not receive loyalty from any of their servants. As Downton’s Carson rose from the rank of Second Footman to that of Butler, so too did Felbrigg’s Maria Vincent rise from Upper Housemaid in 1866, to Cook and then Housekeeper by 1871. Another stalwart was Sam, the Groom, who remained with the Ketton’s throughout the diaries. I like to think that there was mutual affection; the Ketton’s stuck with him, despite Sam being served with a summons to go before the magistrates for fighting in a Sherringham Public house. Left ‘dreadfully disfigured’ and the participant of ‘disgraceful work for a Sunday’, his trip to see a shipwreck took a turn for the worse during an impromptu visit to the pub. Perhaps Sam’s loyalty was also due to the death of his father (who was knocked down by a horse and killed on the spot), and the loss of his sister, who died only two months later? The loyalty and belonging of being a part of the Downton Abbey family, was perhaps also experienced at Felbrigg Hall?

However, it remains that Felbrigg saw its fair share of servants come and go. Including several cooks, laundry maids, laundresses (one after ruining a Garibaldi jacket) and eight Butlers between 1863 to 1870. It would, therefore, seem that the Ketton’s never experienced the stability that Carson brings to the Grantham household.

A line in Rachel Ketton’s 1865 diary, gives an insight into the struggle in recruiting new servants;

7th January 1865
‘Running about to Register offices the whole day without success, wages required by good housemaid being £18 and all found.’

Today a ‘Register Office’, is a local government building which conducts civil marriages and where births and deaths are recorded. However, according to the Harrold & Co’s Postal and Commercial Directory of Norfolk and Norwich 1863, there were several ‘Register Offices for Servants’ in Norwich in the 1860s.

I wondered how one got onto the books of a Register Office, and if formal training was required.

The organised training of domestic labour dated from the 16th century when the coordinated provision of residential care for needy children was established by Henry VIII at his Bridewell Palace in London. In the 18th century, Foundling Hospitals provided a home and training for infants abandoned at their gate or found on the streets, and in the 19th century, several other philanthropically funded homes were established. By the 1860s, these different bodies were brought under the legal recognition of Reformatory Schools and Certified Industrial Schools, which provided a combination of firm discipline and training in trades. For girls, this meant domestic activities, including housework and laundry work.

The ‘Downton Abbeys’ of Norfolk would, therefore, have had access to the Norwich Register Offices, as well as specialist schools and training homes. One such example was ‘The Orphans’ Home on Pottergate Street, which was established in 1849 and maintained by voluntary contributions. Its purpose was for the training of orphan girls for domestic service and other suitable positions. It was managed by a matron (Miss Emma Jones) and governess, and provided accommodation for 30 girls. The Norfolk Mistresses would also have been able to call upon specialised Training homes such as The Training Home for Girls, 14 West Parade, Earlham Road, Norwich, or the Fakenham Institution for Training Girls to Domestic Service. The 1867 Report of the latter (NRO, BOI 68, 117X4) , offers additional information as to the object of such institutions, ‘to continue the education of girls of good character, and give them an elementary education in those occupations which fit them for domestic service’. The facilities included a laundry, dairy, and bakery, and lessons in needlework and knitting. The onsite orphanage of twelve children gave an additional opportunity for the Superintendent or Matron to discriminate who would be most likely fitted for the care of young children as nursery maids. Therefore, girls would have received opportunities for training as Kitchenmaids, Laundrymaids, Housemaids, Parlourmaids and Nurserymaids. The institution also made arrangements for some to sit the Examination of Pupil Teacher, or work in business as dressmakers.

It is unknown if the girls in the result above were employed at Felbrigg Hall or any other of the ‘Downton Abbeys’ of Norfolk. However, there are examples of Rachel Ketton’s use of the local newspaper as a means of filling her below stairs vacancies. 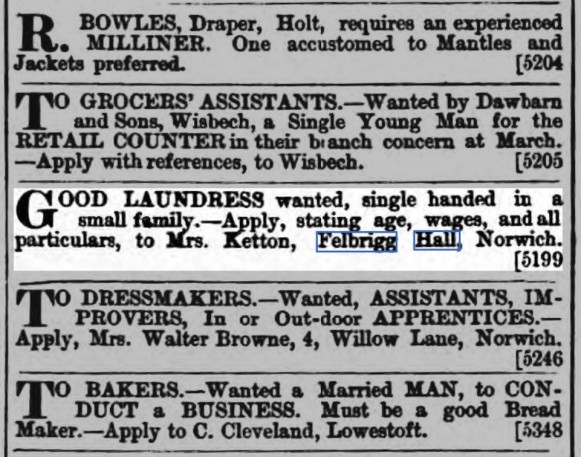 If all else failed, there was always the old-fashioned word of mouth recommendation from friends. However, if the example of Eliza Bruge a kitchen maid at Felbrigg Hall is anything to go by, a mistress could not always be relied on to provide a character of reference. This was especially true if she felt unhappy to be losing her kitchenmaid to a meer Mrs Betts (the wife of the Incumbent at the Rectory in Metton) no less.

2 Responses to Norfolk’s ‘Downton Abbeys’, and recruiting for below stairs