Researching Life in a Village: From Cradle to the Grave

At the end of last half term we welcomed 9 pupils from Marsham Primary School to The Archive Centre. The pupils were involved in researching the people buried in the church graveyard for a village leaflet. On the morning of the session, the children visited the graves to look at the names on the headstones before heading on to Norwich.

The pupils were given materials to enable them to research 4 of the villagers; Harriet Howlett, Thomas Crane, Letitia Randell and Thomas Babington. Pupils worked in small groups, each researching a different resident. They started their research by looking at the burial register to double check the age and date of death of their villager. Next, pupils looked at a trade directory to see what jobs their villager held at different dates, before using census returns to find out about their villager’s life, including their place of birth, job and family. Lastly, pupils looked to see if we held any other documents connected to their particular villager. 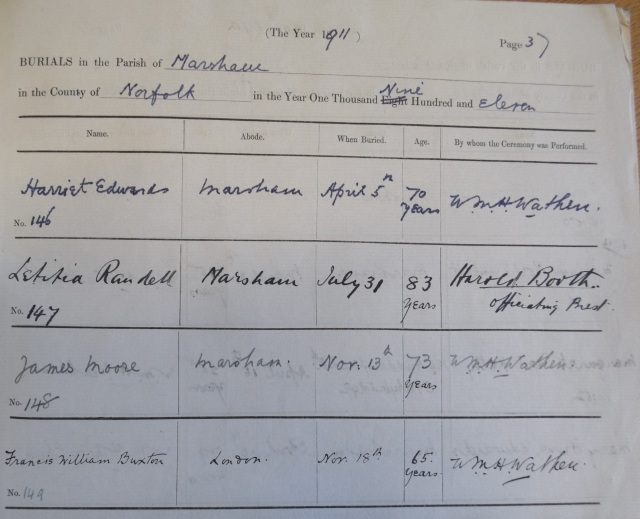 Pupils discovered that the villagers they researched had very diverse lives despite all living in Marsham. Thomas Babington was the Governor of the Reformatory, which looked after children aged twelve to fifteen who had been sentenced to five years detention. Pupils looked at plans of the Reformatory and discovered that there were two rigged masks in the playground so that the boys could be taught seaman’s duties. Letitia Randell, by contrast, took over the running of the Star pub, after the death of her husband.

In addition to working from copies of documents, pupils were able to have a go at using the microfilm of the parish register and see the original. The pupils also had the chance to visit the strongrooms and see where the documents are stored. This was a favourite activity of many of the students, with one saying ‘The strongroom was very cold, there was 1000s of boxes’.

Feedback showed that the pupils had an interesting morning, with one teacher commenting, ‘It was nice for the children to connect with the past and handle real documents’.

We wish the pupils well in their continued research and look forward to seeing the final leaflet.

This entry was posted in Schools. Bookmark the permalink.

6 Responses to Researching Life in a Village: From Cradle to the Grave