As part of the The National Archives -Explore your Archives initiative, the Education and Outreach Team conducted two Archival Ambulations on Monday and Tuesday this week.

Our intrepid walkers met at the Nelson statue in the Upper Close of Norwich Cathedral which was not only a good central place to start our walk, but a good excuse to show two of our favourite documents; the Nelson Letters.

Our walk took us into Tombland where we compared our modern surroundings to Richard Wright’s 17th century map of the cathedral.  We walked along St Faith’s Lane, which runs between the Cathedral Precinct and the Greyfriar’s Precinct, and eventually headed up Mountergate, where we were all sad to see the poor state of Howard House.

Our happy band continued along King Street stopping to talk about the 1942 bombing raids which destroyed St Julian’s church, and how raucous Coroner’s Inquests may have been as they took place in local pubs (The Old Barge aka Dragon Hall).

We stopped at the gates to what was King’s Brewery (entrance to Wensum Lodge) before entering St Etheldreda’s graveyard, and visiting the grave of Elizabeth Elvin who died in 1849.  Her grave says that ‘during 30 years of practice as a midwife in this city she brought into the world 8529 children’.

We stood outside Read’s Flour Mill, which has been converted into flats and touched the grooves made in the brickwork by ropes hoisting bags of grain into, and flour out of the building.

If anyone ever tells you that Norwich is flat then take them to the where the city walls meet King Street and follow our path up to the Black Tower.

It is a climb, but we were rewarded by excellent views of the City Walls including the splendid preservation of arrow loops and battlements. 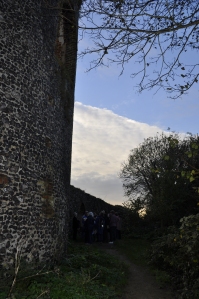 By this time the sun was setting, so we wended our weary way along Bracondale to the Norfolk Record Office where we had a well-earned cup of tea before going into the Green Room and seeing many of the documents we had discussed on our route.

We are hoping to do more Archival walks next year.