From Victorian Corsetry to 50s fashions: The life of Annie Hardy

In a brown non-descript cardboard box in the Norfolk Record Office, I discovered the uncatalogued accumulated photos and papers of Annie Hardy (NRO, ACC 2001/120) . In 2001, these physical memories were handed in for preservation, and as the first person in 16 years to look at is contents, I wondered about the person they represented.Annie was born on 7th September 1871 in Norwich, Norfolk. Her Father, Henry, was 31 and her mother, Ann, 26. She had three brothers and five sisters, and died on 27th February 1962, exactly 16 years to the day before I was born.

However, what interested me most in Annie, was that she was a women who straddled the Victorian and Modern era. The first photo, portrays a typical Victorian women: formal and held upright by her corset and starched collar. In the second, she enjoys a visit to the beach (Annie sits on the left next to her nephew), and again epitomises the formal Victorian women in her ankle length skirt, long sleeved jacket and large rimmed hat. Although her nephew has his shorts on, it is reassuring to note his jumper, and therefore, the Norfolk summer beach weather remains somewhat similar to that today.

In other photos, we see the same Victorian women standing beside a 1950s bus, dressed in far more familiar clothing, and we can but wonder at the change she experienced during her life; not only in the changes to material culture, as shown by the clothes she wore, but also radical changes in attitudes towards women, and by women of themselves, and the environmental changes of living through two World Wars and post war Britain. 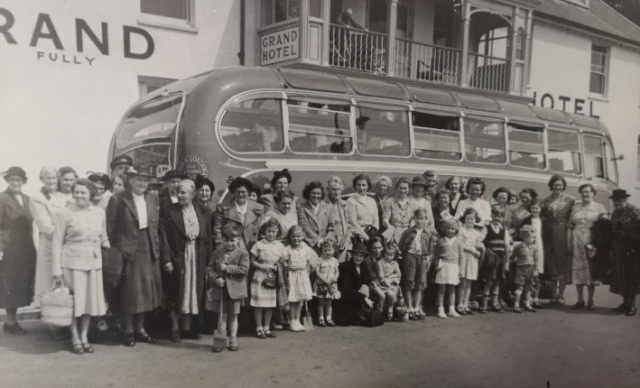 Born in 1871, during the reign of Queen Victoria, Annie started teaching aged 14 at St Peters Parmentergate, Wymondham, and remained in education until her retirement 56 years later as the Head Teacher at Barnham Broom school in 1927.

As a working class child (her father was a fitter and two of her sisters became draper assistants), Annie is likely to have benefited from the 1870 Education Act, which was the first piece of legislation to commit to the provision of a national education. She would also, have remained in education until she was at least 10 years old, due to the 1880 Education Act which made school attendance compulsory for children aged between 5-10 years old.

In 1888, Annie qualified as a pupil teacher in Religious Knowledge with the Diocese of Norwich, and aged 18, gained teaching qualifications in ‘Elementary Knowledge of Musical Memory in Time and Sight Singing’. Over the next 5 years, Annie continued to develop her teaching practice and gained qualifications including; ‘Hygiene’, and ‘Domestic Economy’, ‘Paper and Cardboard Work’, and ‘Practical and Solid Geometry’. 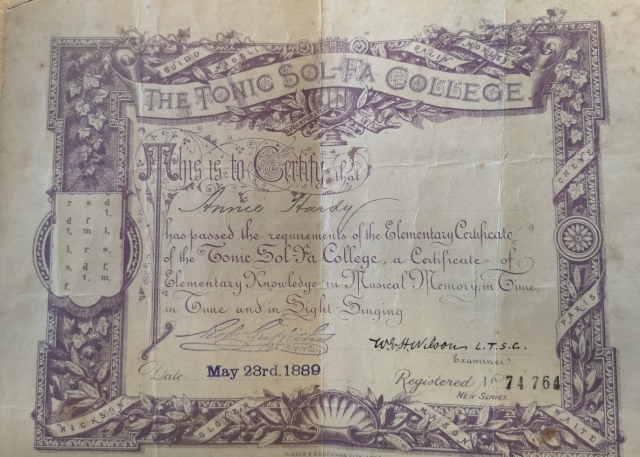 Aged 29, and earning £80 per year, she was appointed Head Teacher of Barnham Broom School where she remained for the next 27 years.

Within the documents were a number of Norfolk Education Board inspection reports which all spoke highly of Annie’s teaching and leadership. It is interesting to read the school inspection reports, showing that they haven’t changed all that much in the last 100 years; is the lesson teacher or pupil led?, is there an appropriate curriculum?, and is behaviour acceptable? A significant difference is the length of the inspection report!

Annie was obviously dedicated to her teaching and her students, and as an unmarried career women she didn’t fit the Victorian stereotype. Dying at the Norfolk and Norwich hospital in 1962 aged 90, she left the sum of £2,688 (approx. £40,000 today) to her nephew, having not had any of her own children. She also, left a legacy of Norfolk educated children, and a box at the Norfolk Record Office to be discovered 50+ years later by another Norfolk teacher.

1 Response to From Victorian Corsetry to 50s fashions: The life of Annie Hardy