A Glimpse into The History of Elm Hill: The 1860s and Father Ignatius

Since moving to Norwich three years ago, I have spent many a day ambling around the city centre, often with my camera, and the sight of Elm Hill was immediately of intrigue to me.

This intrigue is obviously shared by many. In June 2019 Elm Hill was transformed into a winter scene for a John Legend produced, Netflix film ‘Jingle Jangle’. Before that, the Norwich Society worked hard to save Elm Hill from the deterioration it had suffered by the 1930s. Today they proudly state that Elm Hill is now “a picturesque mixture of private dwellings, offices, shops, restaurants and cafes – beautiful, peaceful and thriving.” This quaint street seems to transport visitors to a completely different century, with its cobbled streets and old-worldly character. 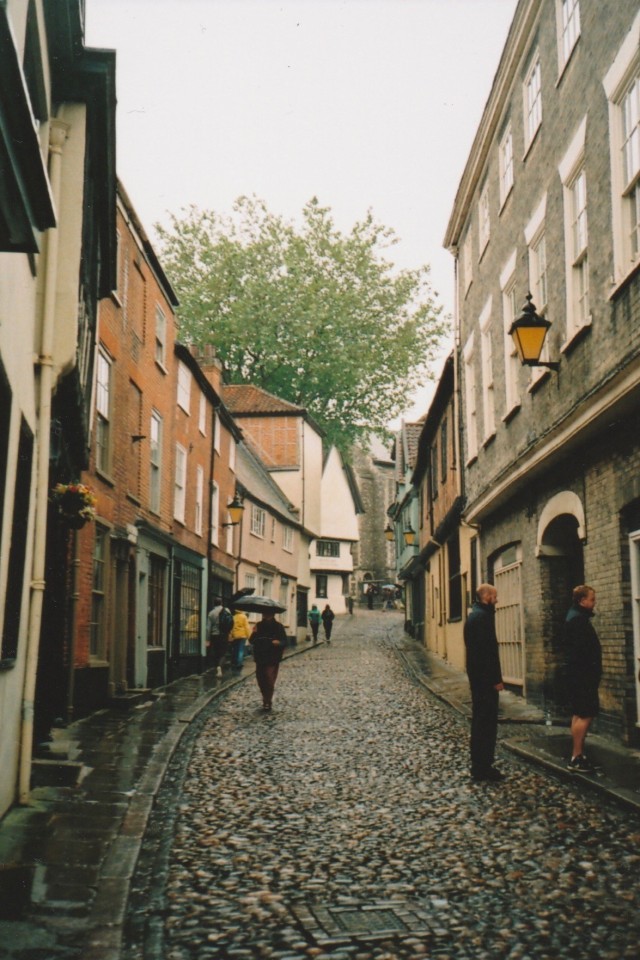 Slides showing before and after the restoration of Elm Hill. Photographs and slides of Cyril Herbert Walker, Norwich City Estates Surveyor, 1925-1930. Norfolk Record Office, ACC 2010/2 1 of 2.

Upon my research into Elm Hill, I have learnt that the inhabitants seemed to have fluctuated and changed significantly over the centuries. The 15th century saw Elm Hill as a popular area for wealthy merchants, with many newcomers to the city integrating themselves into the local population. These newcomers, were nicknamed ‘strangers’ and this label is reflected in todays ‘Strangers Club’, a popular venue on Elm Hill.

Whilst searching through the archives, an account of Elm Hill which particularly struck me was that of Mrs. Simmons of Beckenham, who reminisced fondly on her life living on Elm Hill in the 1860s (NRO, MC 2716 L10/1-10). She resided in the Strangers Club for the first twenty years of her life and talks proudly of how it was once the residence of Augustine Steward, the Mayor of Norwich three times during the 16th century, and how it is believed that Queen Elizabeth I, when visiting in 1578, looked through her front window upon the great elm tree, which used to stand in the middle of the plain, before it was lost to great elm disease.

Although Mrs. Simmons focuses in on many aspects of life on Elm Hill, her anecdotes on the coming of Father Ignatius, Reverend Joseph Leicester Lyne in 1864, really captured my interest. 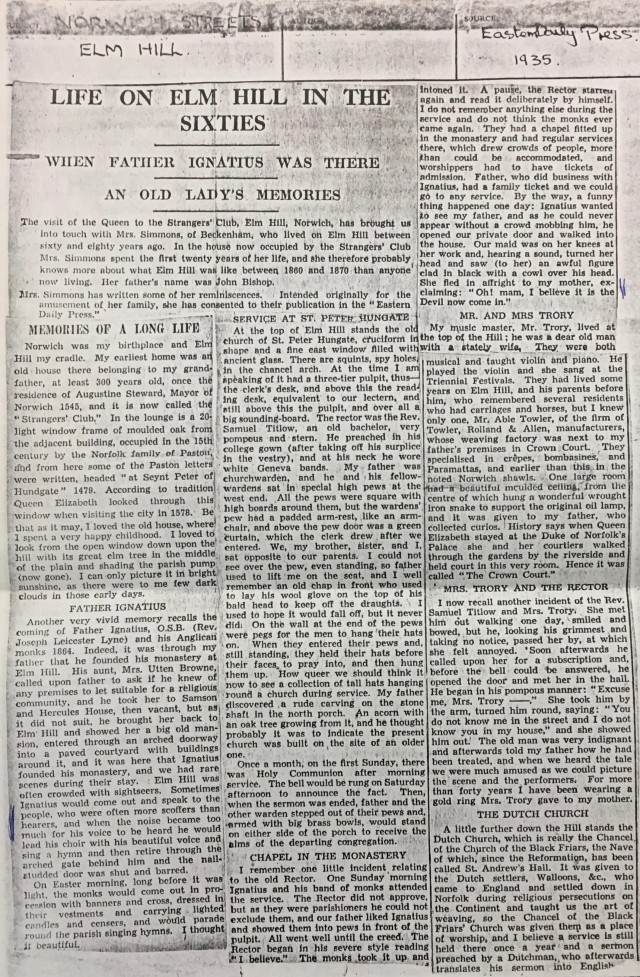 Mrs. Simmons recalls that her father first introduced Ignatius to Elm Hill, saying “indeed, it was through my own father that he founded his monastery at Elm Hill. His aunt, Mrs. Utten Browne, called upon father to ask if he knew of any premises to let suitable for a religious community”. She talks about him fondly, whilst acknowledging that the monks had ridiculers and didn’t necessarily fit into society in Norwich.

“Elm Hill was often crowded with sightseers. Sometimes Ignatius would come out and speak to the people, who were often more scoffers than hearers, and when the noise became too much for his voice to be heard he would lead his choir with his beautiful voice and then retire…”

When searching the archives for glimpses of Father Ignatius’ life in Norwich, a few sources were found. An account by Brother David details Ignatius’ life (NRO, MC 2133/1 924X4). His account also highlights the controversy that the monks brought to society, gaining many followers whilst also bringing a great amount of hostility. The religious context of the era explains for this resentment. Ignatius wanted to revive monasteries in England and Brother David recalls:

“The village of Claydon, in the diocese of Norwich was a centre of Protestantism, hence the “High Church goings-on” as reflected in the presence of real Monks, soon began to make a stir.”

“From Ipswich and from villages around Claydon, people came in shoals” to see Ignatius preach.” 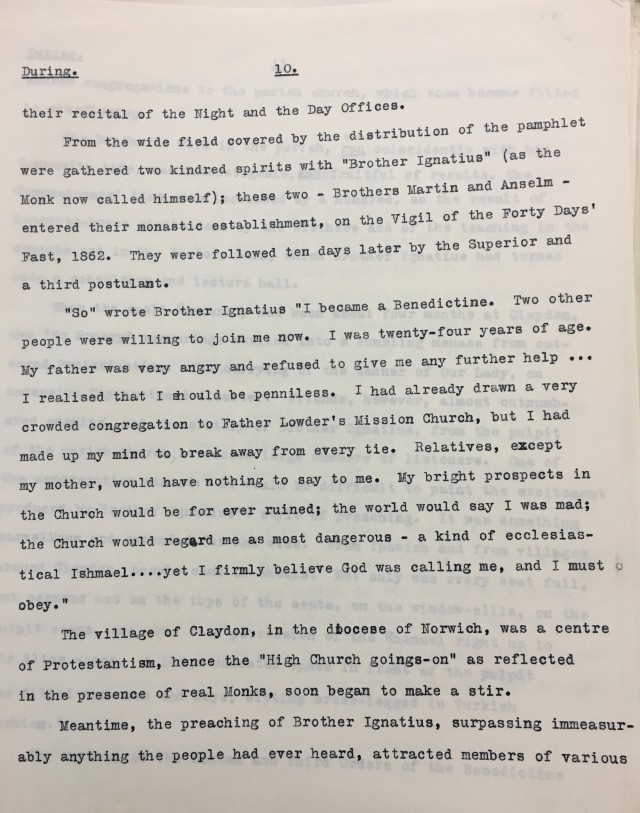 During Father Ignatius’ time in Claydon, the monks encountered many violent acts of hostility; specifically, there was an attempt to set the barn alight in which he was preaching, which was only prevented by an individual whom overheard the commotion and was able to deter the attack.

Ignatius, upon his return from a visit to Scotland, discovered his wing of the rectory at Claydon was occupied. He was told it was required for an alternative use, as a nursery. This was an obvious request for him to leave. It was then, after being forced to locate a new site, that the monks settled at Elm Hill in January 1863. Brother David states bluntly that “no one thought he would be able to stay a month in the place.” Indeed, the upkeep of the Elm Hill site was expensive, and the monks gave large amounts of money to the community resulting in them living in extremely trying conditions. 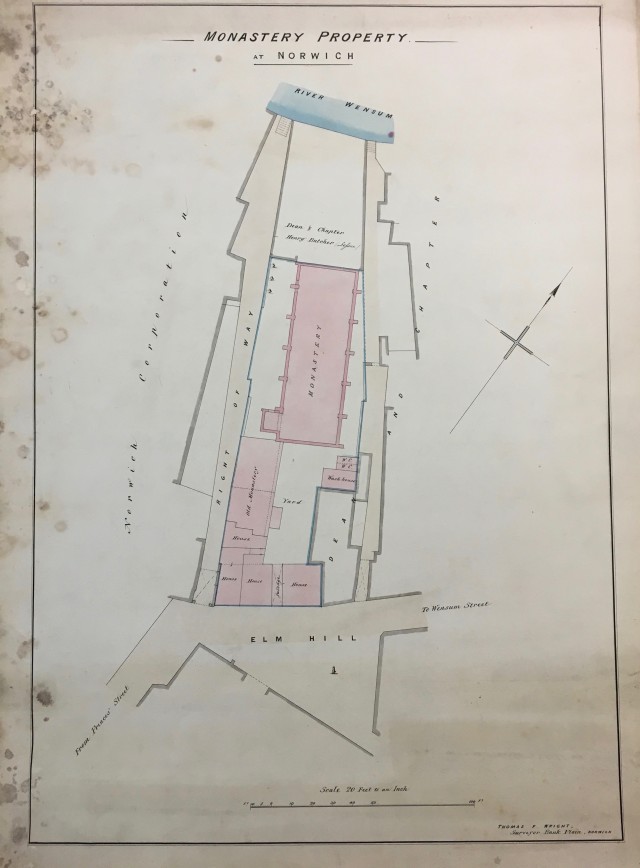 A bill of complaint in the archives summarises the complex accusation and subsequent loss of the Elm Hill site.

Ignatius had acquired the property, through Stephen Balls, as Reverend George Drury had advised him that there may be complications buying the site for religious activity. It was Joseph Allen, a surgeon who practised at Norwich who had advised and organised that Stephen Balls would be the figure to buy the property on behalf of Father Ignatius.

Allen then worked to use Father Ignatius’ vow of poverty to manipulate Balls into believing that the monk could not possess any property and that in fact it was his wish that the property fell into the hand of Allen himself. During this time Father Ignatius was unaware of these events and continued to believe that in due course the property would be conveyed to himself or a trustee.

It is reported that after a trip, Ignatius returned to find that the issue of the site’s ownership had splintered the monk community, with the priory up for sale. Ignatius fought for his priory, but after spending all his inheritance, he failed [1]. In 1869 a bill of complaint was fashioned (NRO, MC 2133/9, 924X5). There was great back and forth regarding the true ownership of the site, and in 1869 it was concluded that

“The Plaintiff [Father Ignatius] has been put to and has incurred very heavy costs and expenses by reason of the aforesaid wrongful and fraudulent acts and dealings of the Defendant [Reverend George Drury Clerk] and damages in respect thereof ought to be awarded to the Plaintiff to be paid by the Dependant to the Plaintiff.”

However, it was too late. By the spring of 1866 the community was in ruins. Some support for him remained in Norwich, with evidence of him returning to speak on several occasions, in 1890 and 1894 at the Agricultural Hall [2].

Father Ignatius and his monks obviously brought with them great controversy to the Norfolk community. From his eviction from his wing in Claydon and then the more problematic struggle with his site at Elm Hill, it is evident that he was not welcomed by all. Mrs. Simmons’ account paints a positive, charismatic image of Ignatius but accounts of community hostility towards himself and his monks illustrate that opinion was greatly divided towards the principle of accommodating a monk community in Norfolk.

2 Responses to A Glimpse into The History of Elm Hill: The 1860s and Father Ignatius