On a stormy August night in 1968 at the height of the Cold War, Ted Buxton a farmer in the Heydon area witnessed a terrible collision between two RAF aircraft. An RAF Victor from RAF Marham on a training flight crashed into an RAF Canberra returning to its base located in RAF Bruggen Germany. The incident was a tragedy and since skies became so crowded with aircraft during the Cold War, it is likely a disaster of this nature was to be expected.

Buxton captured the incident by means using photography that evening when gut instinct told him to get his camera (NRO, ACC 2017/66). Upon retrieving it he was inside with his father and younger brother when the sky suddenly turned crimson. The first of his pictures was just a mass of red while another depicted the moment in which the flaming fuel tanker spiralled toward the town of Holt below. His last photograph showed the Canberra just poking down through the clouds. ‘That was just like a premonition’, Buxton described, as he recalled his feelings towards the incident in a 2017 interview. Upon hearing the sound of the air crash which according to Buxton sounded like ‘glorified thunder’, his family stepped out to investigate.

The photos taken that night are chilling as the silhouette of the Norfolk countryside is lit up by a Hellish crimson light. It would not be far fetched to believe that many of the locals mistook the blood coloured sky as signifying the start of the fallout. Indeed two eyewitnesses who were driving through the rain were shocked as the ‘whole landscape was lit as daylight’, and wondered if the sight before them were the tell-tale signs of a nuclear first strike. Others in the area were making their way towards Holt itself before being turned away. In some of the pictures a distinctive fiery orange light is visible, pinpointing the location of the explosion and the falling remnants of the aircraft. 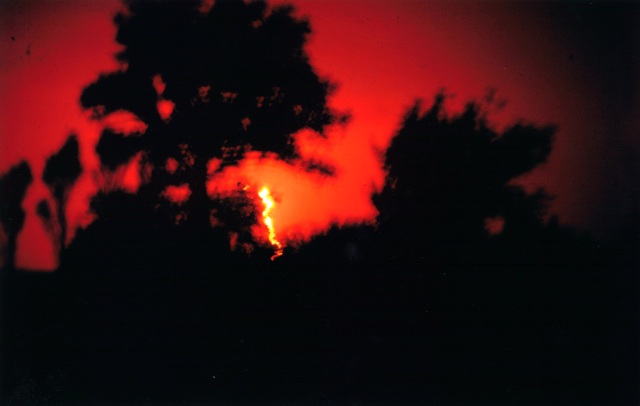 One plane landed in a field and according to Ian Jarvis, a police constable at the time, the flames were so hot that the force was unable to get anywhere near it. It was only when firemen snuffed out the flames when four bodies were discovered, and the human cost of the incident was revealed. All seven crew members, ages ranging from 24-39 sadly perished, despite much effort made by the towns emergency services to recover potential survivors. One of the victims landed in a pine tree which twisted due to the impact of the falling body. A helmet and scorched papers were discovered in the playing fields of Gresham School while a more gruesome discovery, a glove with a hand in it, was recovered in Sheringham.

Remarkably, nobody in the town below was hurt by falling debris and buildings suffered minimal damage. Local newspapers described it as ‘a miracle escape’, for the people of Holt. MP Merlyn Rees was astonished that nobody perished on the ground. To commemorate the fallen airmen a memorial was erected in the Church of St Andrew reading, ‘Indeed you did not grow old. We will remember’. In 2018 another memorial was unveiled at Holt Country Park where the twisted tree still stands as a ‘living memorial’ to the disaster.

The Miracle of Holt – remembering the men that died when two RAF planes collided 50 years ago, 18 August 2018, Rowan Mantell, EDP