The estate plans for Bullards Brewery date from 1895, beginning shortly before it registered as a limited company when it was recorded that it owned 280 houses and leased 161.  Eight volumes of plans detail their estates across Norfolk and Suffolk (and one in Essex), the vast majority drawn by surveyor Walter Frederick Browne.

Most properties are inns, taverns or hotels; the word public house or pub never appears.  For this blog, the word “pub” will be used to refer to them all.

Think brewery, think beer.  But whilst the majority of these plans include a pub, a minority have no pub at all and, where there is a pub, there is usually so much more besides.

What’s in a name?  There is an endless variety of pub names and several changed names over the years.  An inn or tavern usually meant that food and accommodation was available.  Inns were usually along highway routes with stabling available for horses.  Names ending in arms often reflected an allegiance to a local dignitary or place.  The Hoste Arms at Burnham Market, was named after Captain Sir William Hoste who served under Lord Nelson and was one-time owner of the Sandringham Estate.  (NRO, BR 259/2)

However this is not always the case.   The Butchers Arms Inn, Bungay took its name from the butcher’s shop on site and the estate included extensive slaughterhouses and piggeries.

Some names refer to well-known people such as The Marquis of Granby Inn on Bishopgate Street, Norwich, named after a commander in the Seven Years War. Many soldiers leaving the army became publicans and would often name their pub after a commander they had admired.

By contrast The Paul Pry Tavern on Grapes Hill, Norwich was named after a fictitious character in a play of the same name.  To be a ‘Paul Pry’ is to be a nosy person!

Many names have an obvious association with a location or trade and, of course, referring to the monarchy was always popular.  The Balloon Tavern on Westwick Street, Norwich led down to the Balloon Wharf on the river Wensum. On 30 September 1860 licensee of The Balloon Tavern, Edward Crowe, fished out the body of Robert Nockold found floating in the river.  A pub’s location brought its own particular hazards!

The physical layout of the estate was very much determined by local geography and how the pub, and its ownership, had evolved over time – for many had been pubs long before they were acquired by Bullards. 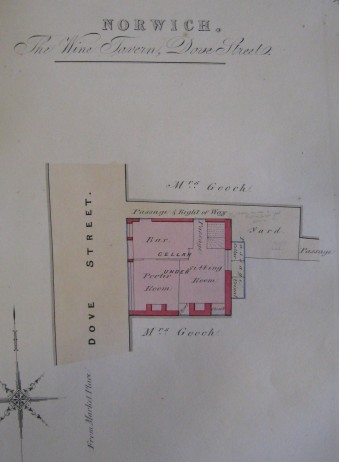 Pubs, as we still see today, often occupied a corner plot.  The Vine Tavern, wrongly written as The Wine Tavern on the plan, in Dove Street, Norwich has one of the most compact sites of all.  By contrast The Bull Inn at Aylsham was long and thin while some estates, like The White Horse Inn at Blakeney were separated by other properties or land. Others, such as The Ipswich Tavern on St. Stephen’s Plain, had cellars underneath their neighbour’s property (NRO, BR 259/1).

In the 19th century, when living conditions were often crowded, the pub offered not only a place to drink but where other activities could be enjoyed.  Leisure amenities included skittle grounds, bowling greens, club rooms, bagatelle rooms and gardens. 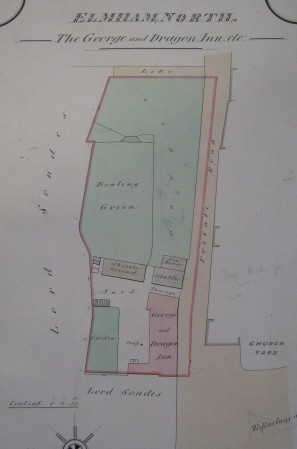 Pubs in rural areas and on local highways, would usually offer accommodation for horses too.  Stabling would often form a significant proportion of the site. 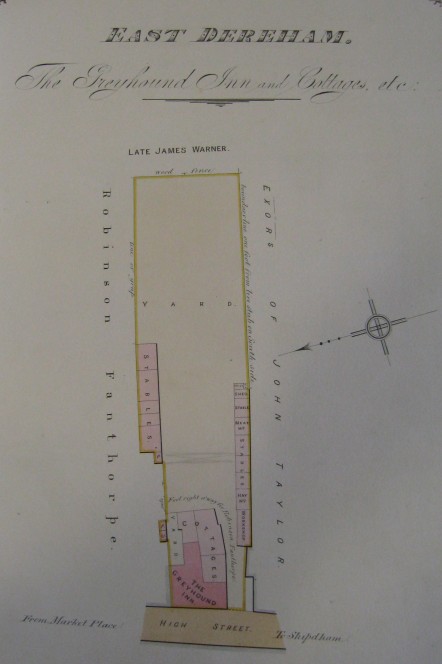 As the plans of The Greyhound Inn and Butchers Arms above show, houses and businesses were also a common feature of the estates.  In rural areas the plot would often include piggeries, orchards and farmland.  At The Rose Cottage Tavern at Wendling there was even a school on site (NRO, BR 259/2).

A small number of the plans do not include a pub at all.  The very sumptuous house on Duke Street, Norwich was lived in by Walter Richard L’Estrange, nephew of Richard Bullard the founder, and was himself a brewer.

The plans for another house at Old Catton were removed from NRO, BR 259/4 before the plans were acquired by the NRO.  This may be because Frederick Bullard lived at Old Catton and were the plans of his own home.

Another interesting “non-pub” plan is that of the Empire Music Hall sitting between Upper and Lower Goat Lane in Norwich. 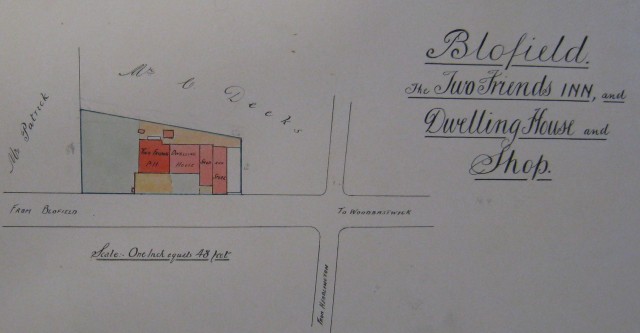 If this blog has whetted your curiosity as well as your thirst, explore the business records of Bullards to find out more.

With additional information from www.norfolkpubs.co.uk