‘From witchcraft to understanding your own electricity account’: The activities of The Electrical Association for Women

We live in a gadget driven age, today’s new technology quickly replaced by the next latest advancement.  However, back in the 1920s, simply having electricity in the home was a marvel in itself.

The Electrical Association for Women (EAW) was a national organisation co-founded in 1924 by Caroline Haslett and Laura Wilson.  Sussex born Haslett was an electrical engineer and a champion of women’s rights. Through using electricity in the home, she wanted to liberate women from household drudgery so that they could pursue their own careers. Haslett became the first director of the EAW which had a clearly defined focus – to promote the safe use of electricity in the home. 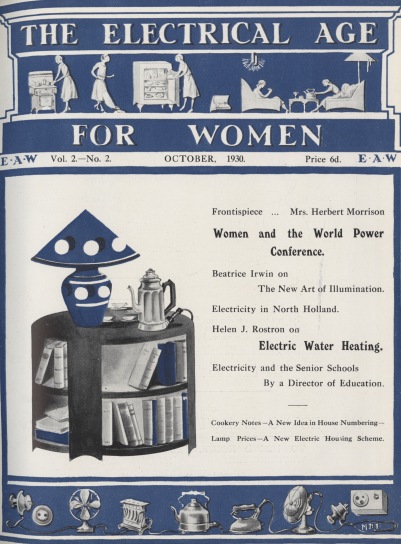 Front Cover of the EAW Journal, October 1931. Image supplied by The Institution of Engineering & Technology Archives

The NRO holds records running from the 1960s to the 1980s for the Great Yarmouth, Kings Lynn and Diss & Scole branches of the EAW (NRO, SO 111).  Great Yarmouth had two branches; one met in the afternoon and the other met in the evening.

EAW meetings focused on its aim of promoting electrical safety with a wide range of talks and visits related to the increasing number of electrical gadgets making their way into homes over the decades.  As one speaker at a Yarmouth meeting said, ‘We tend to take electricity for granted and to get careless in using it’.

When the Kings Lynn branch reviewed its year of talks in 1973, it commented with some humour that they had ranged ‘from witchcraft to understanding your own electricity account – could there be some connection here?’ No record was found for the witchcraft talk! 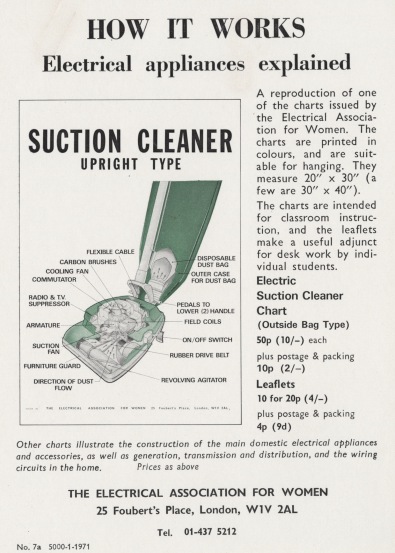 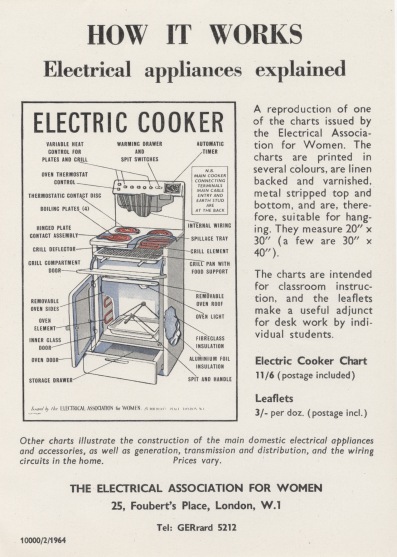 Some talks were clearly promotional in their intent.  The Yarmouth evening branch had a talk on Ariel washing powder with free samples given and Mr Beaumont from Philips Ltd spoke about different types of vacuum cleaners – no doubt all of them made by Philips.  The Kings Lynn branch had a talk by the Electrolux Company with a demonstration on a revolutionary new vacuum cleaner where the motor cut out when the bag was full.

The women of the EAW did not just focus on domestic appliances in their own homes but took a wider, enlightened view on the impact of electricity on society.  Environmental issues were explored looking at the building of new power stations and conserving energy.  The branch recorded ‘Our slogan in future should be ‘Warmth without waste’.’

Talks were given by various charities.  Shelter spoke on the poor living conditions endured by some with dangerous electrical wiring.  All branches raised money for a range of charities largely involved in improving the quality of life for others.  These included Shelter, the NSPCC, the Salvation Army and the Red Cross. 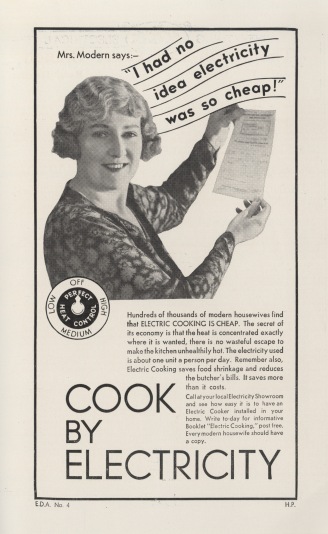 Advert in the EAW Journal, July 1932. Image supplied by The Institution of Engineering & Technology Archives

Other visiting speakers covered a range of topics that do not immediately appear to have an electrical focus. Some electrical link may have been made but the women may have simply welcomed more light-hearted talks occasionally.  A talk on bees delivered in a Norfolk dialect had one member ‘crying with laughter’ while a physiotherapist told the women that ‘to stand correctly we must tuck our tummys (sic) in and pretend we had a £10 note between our buttocks’.

All branches organized a range of visits, lunches and dinners for its members.  The Great Yarmouth branch was rather fond of dinners at the Cliff Hotel where a three course meal was booked for £1 a head.  Trips were largely local to places such the Wedgewood factory, Sizewell Power Station, Anglesey Abbey and to the Theatre Royal in December to see the pantomime.

The EAW was also visionary in its aims.  Members attended annual conferences around the country.  In 1976 the theme was the role of the EAW in the community and how it could help young married couples and the elderly.  The Caroline Haslett Trust was formed.  It provided scholarships and did much to encourage schoolgirls to consider careers in science and engineering.  At one branch meeting in 1968 the President spoke of her attendance at a women’s engineers’ conference in Poland before presenting a copy of her book ‘Doors of Opportunity’ to local high schools.

The Diss and Scole branch continued meeting until 1986 when the EAW was formally disbanded; the other branches ended shortly before usually because of dwindling membership.  Any funds remaining in the accounts were given to charity or returned to EAW HQ.

It might be amusing to reflect that music centres were considered ‘complicated articles’ but in many ways the EAW’s aims are just as applicable today.  As one speaker had said, ‘We tend to take electricity for granted and to get careless in using it’.  With the use of social media, the internet, robotics, driverless cars etc. the issues surrounding electrical, or technological, safety are even greater today.