Memories of Christmas from a German Prisoner of War

Soon after the Second World War ended German POWs were released across the country. Over 100 prisoners were released from Mousehold Camp based in Norwich. One such prisoner was Hans Dittrich who was interviewed shortly before release. Dittrich obviously appreciated Norwich as seen in an attached newspaper and gives evidence that he and his fellow German prisoners were treated decently, ‘When we leave Norwich, in two days, we shall take with us memories of many happy hours spent in the city, whose inhabitants, in spite of the damage inflicted by the war, never showed any hostility to us’. After living and serving under a fascist dictatorship, Hans very much appreciated British attitude towards democracy, in the same article he says, ‘The younger generation of us particularly have been able to see for the first time what the way of life in a real democracy is’. More evidence that prisoners were treated fairly well is highlighted in letters to his friend Mrs Statham where he invites her and some other female friends to a Christmas concert being held at the camp, visits were also permitted. Hans delightfully replied to his friend, ‘I accept with pleasure your kind invitation for Christmas Day’. 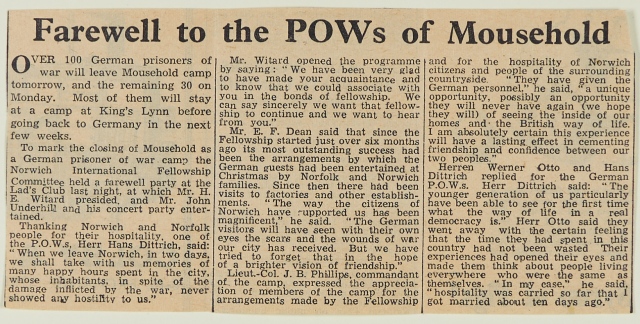 By the early summer of 1948, Hans finally arrived home after a long and difficult journey back to East Germany where his family lived. On June 10 ‘on my mother’s birthday’ a steamer carried him and other German POWs to Holland. Soon after he spent four days at a discharge camp in the British Zone before being transported to Leipzig where he and his fellow prisoners spent a miserable fortnight at a ‘so-called quarantine camp’. When Hans finally returned to the now Russian controlled Dresden, he was heartbroken by what had become of his city. He commented ‘there is to-day an area of 30 square miles of ruins. Not a single house or church from the inner city survived the raids. Over 400, 000 people lost their homes in one night and 150,000 lost their life. Only the suburbs are better off’. He acknowledged however that reconstruction despite being the hardest hit city in Germany was going along well. Meanwhile Hans lamented life under Soviet rule, arguing that life in the British zone was better and that availability of food, especially meat and fats, as well as clothing was scarce due to rationing, ‘Only children up to 5 years of age get half a pint (of milk) per day. There are children of 9-10 years who haven’t seen a banana, a pine-apple or a grape-fruit their whole life’. On clothing he described, ‘if you are lucky you will get one pair of shoes for instance every ten years or one suit every fifty years’, he had nothing to wear except some ‘new-look’ clothes, given to him by the Royal Army. Nevertheless he desired to return back to a carefree life of paying visits to relatives, writing, reading, swimming and sun bathing.

While continuing to send Mrs Statham various German stamps Hans expressed envy over her seaside holiday, ‘What a pity we Germans aren’t allowed to spend a holiday somewhere in Switzerland, Bavaria or Austria, for I love the mountains more than the seaside’. It is unlikely that Hans had time for a holiday regardless, since he was training to become a teacher, after the majority of teachers who were previous members of the Nazi Party were dismissed. Although he himself had been a Nazi member, his time in Britain likely made him a more preferable candidate to the Soviets as he took an exam for mathematics and grammar. As Statham and Hans remained in contact, he was overjoyed whenever his overseas friend sent him food parcels to him and his family, in a November letter he commented, ‘You can’t imagine what joy your parcel brought’, since they were a rare treat in Russian occupied East Germany, he said, ‘The tin of milk and the sugar my mother put away for X-Mas’. Dresden was slowly recovering meanwhile, a department store where ‘nearly everything you need’, except for meat and fat was available, but lamented that prices were too high, as a response to the black market. £3 today may seem reasonable for a pair of silk stockings, but in 1940’s war torn Germany, many people were unable to afford a decent pair of stockings for the upcoming winter. The State Opera house, re-opening with Beethoven’s Fidelis was also rebuilt but queues lasted for hours and tickets were difficult to obtain, probably because most entertainment facilities in Dresden were destroyed in the war. Hans also yearned to see English and American in the cinemas since only Russian and pre-war German films for the time being were available (or permitted) to be shown.

Shortly before Christmas of 1948, Hans had his first ‘normal’ Christmas since 1941. From 1942-1944 he spent his Christmases with the German army, 1943 ‘alone on a little outpost’ and 1945-1947 as a POW in America and Britain. The festive season brought back nostalgic memories from when he was a child, he remembered the ‘boxing days days in our nice house, lots of presents under the ten feet – high X-mas-tree, which was decorated with dozens of burning candles. And to – day, no presents, no house’. Hans remained optimistic however, commenting that he and his family were happy, healthy ‘and able to wait for better times’. Also despite receiving no presents, Hans was more than grateful for a Christmas card and Christmas wishes sent from his British friends. His Christmas was quiet, ‘not so joyful and happy as before the war perhaps’, but he was happy to be unified again with his family. To add to his happiness, the government provided extra food, particularly sugar, flour and poultry. There were no wine or nuts at the shop but Hans shrugged, ‘but we could do without them’. A small Christmas tree with some candles was erected in his house, referring back to German holiday tradition he recalled, ‘It is an old German custom to have a Christmas tree decorated with about 10-20 burning candles, nuts, apples, silver bells etc’. On boxing day however while Hans and his mother visited family members, his father was forced to work. The unusually mild winter in his home city reminded Hans of ‘dear old Norwich’ although the cold weather was the kind ‘to catch a cold and keep it for some weeks’.

Things were still far from cheerful in Dresden, despite the disbandment of the Nazi Party the Soviet government used similar mind control tactics. Of Hans’ cousins for instance was ordered to appear before the Russian police for writing in a letter to a friend, ‘We still live, but for how long?’ Thankfully he escaped to the American zone where he took up a career as a salesman in a drug shop. Many others were not so lucky however, disappearing ‘without leaving a trace’. Hans feared that these men and women were in a concentration camp which were still open, or a Russian Labour Camp. On concentration camps he commented ‘thousands of good, brave Germans, who either are completely innocent or just did not do what the Russians ordered, or who were careless enough to tell a ‘friend’ or a neighbour about their feelings, fill these subhuman camps’. Many prisoners were locked up without a trial and died in these institutions, to make matters worse family members could not get permission to see or even communicate with them. A previously healthy and strong relative of Hans who stayed in one of these camps lost so much weight that he was unable to work. He complained of the hypocrisy of the ‘Russian beasts’, when they claimed to be of a nation of high culture and democracy. He assured Mrs Statham that many Germans contrary to what the Stalinist government believed, had ‘learned from their mistakes since Hitler came to power’. Although admitting to being a member of the Nazi Party he wrote that ‘Dictatorship is the most cruel and destructive form of government one can think of’. He expressed sadly that ‘After our capitulation in 1945 we wanted to become a democracy, to pay our debts and to establish a peaceful Germany. Now we see that our dream became true, but only in the three Western Zones’. Hans was bitter that East Germany suffered ‘under the terror-regime of the Russians and the Russian-sponsored Socialist Party (SED). When Hans refused to join the SED he was fined. Expressing anger over his ‘idiotic government’ he grieved, ‘We Germans see no way out of that misery, as long as the Russians are here’ and that most of the small level of production went back to Russia and other Eastern nations. Whenever East Germany rarely got something out of Russia’s ‘friendship’ the government according to Hans cried with joy, ‘’Thank you, dear Stalin’’ at the expense of the tax payers.

Christmas 1949 seemed to improve Hans’ mood however as he received presents, food parcels, with rare goods such as chocolate, fat and milk, and Christmas cards from Britain. Once again Christmas was ‘quiet and comfortable’ and a day in which family members greeted each other. Unfortunately there was no boxing day this time as there was in Britain and Hans would soon have to return to work, this time as a carpenter. One year later in 1950, Hans after a spending his first ‘nice and quiet holiday for me since 1939, when war broke out’, observed a snowy winter. Once again changing jobs, this time he served as a store keeper. He admitted that it was an ‘interesting job, but now before X-mas we have more than enough to do and overtime work is the rule’. It seems that despite living under a Stalinist dictatorship, this did not deter East Germans from carrying out their Christmas shopping as citizens in America and Britain did.

Letter from Hans Dittrich of Dresden to Mrs Statham of Norwich. NRO, MC 2386/9

Adjusting to life back in Germany after a long time in Norwich was difficult for Hans Dittrich, especially as his homeland was in a war torn state which had seen one dictatorship replaced by another. Nevertheless his contact with Mrs Statham and her family helped to keep his morale up, especially around the Christmas season. Though he and many of his fellow East Germans lived under the shadow of Stalin, this did not deter Christmas spirit, even in a city like Dresden which had seen much devastation during the war. Even if they were not guaranteed presents and had to depend on rations for a Christmas dinner, family and unity alone was good enough for Hans and the citizens of East Germany around the festive season.

This entry was posted in Snapshots from the Archive and tagged christmas, Hans Dittrich, letters, norwich, prisoner of war, Second World War. Bookmark the permalink.