As someone who loves studying twentieth century British social history (and has ambitions to become an archivist!), volunteering at the Norfolk Record Office was an opportunity I couldn’t resist.

Participating in the Norwich building control plans indexing project (NRO, N/EN 12/1) is both interesting and instructive. Each volunteer is assigned a box of building plans each week of the project. Predictably, much of the assignment deals with simply transcribing a street name, the architect or building contractor involved, and whether the application was ultimately approved or denied, and on what grounds. However, while doing the transcription work, there are occasions when the details in a given plan arrest my attention. Notations about the behaviour of some of the applicants, their premature and ramshackle erections and property amendments, their attempts (or lack of) to obtain approval for their new additions from neighbouring property owners were informative relative to the building regulation practices of the day. Also, when comparing the plans it is possible to detect some notable trends, for example the push towards greater sanitation and hygiene with the introduction of indoor toilets at the turn of the twentieth century.

I am often charmed by the intricate and precise architectural drawings that communicate the ideas and ambitions for the building project. Conventionally, these drawings are made in ink on tracing paper, coated linen or a similar material, and any additional copies had to be laboriously made by hand. The development of computer-aided design may have made manual drawing almost obsolete, but something quite beautiful remains in the complex geometry of the late nineteenth and early twentieth century sketches and drawings. 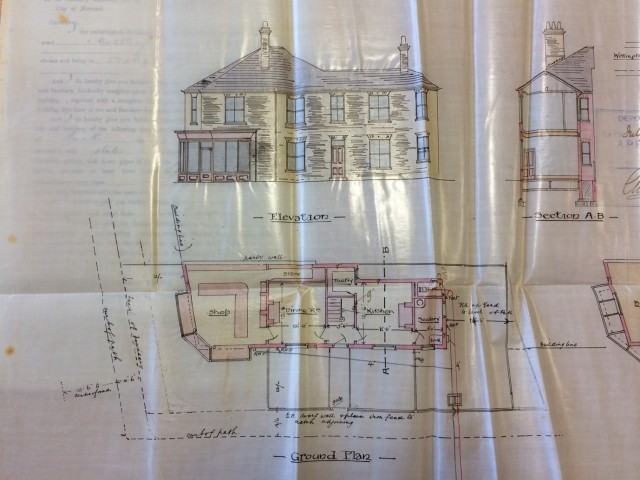 This project has certainly enhanced my appreciation for building control and the many stages that an application must pass through before a building assignment can be considered for approval. I have had the opportunity to get to know directly and in a ‘special’ way an aspect of Norwich’s social and economic history, and become part of a project that will open up this compelling collection to users via the online catalogue.

This entry was posted in Behind the Scenes, NRO Research Bloggers, Snapshots from the Archive. Bookmark the permalink.