The experiences of the Earl of Albemarle during the Boer War: Part 2

Albemarle and his battalion arrived in the ‘badly laid out’, ‘half savage’ town of Bloemfontein. The earl was especially happy to see the Union Jack waving above the town and the ‘pleased reaction’ of Lord Roberts after inspection. His cheerfulness did not last for long however as his men were soon after ordered to attack Schantzkraal. Heavy firing could be heard and Boers could be seen decamping in the distance but to Albemarle’s disappointment, the battalion did not engage with them.

Fortunately for the earl however the men would come into close contact with the enemy the next day at Welkom. With a force of about 10,000 men Albemarle finally came in touch with the Boers as they quickly fired upon them, After about an hour however the British soon shelled the Boers in return and they watched as the Boers bolted, shells bursting over them.

The battalion began to move towards Winburg. For seventeen miles in the sweltering heat the men persevered in the long hard march, being forced to carry wood for the last three. That night a party set off to cut off the railway from Winburg which if successful would prevent the Boers from escaping. It seemed it was a success, as Albemarle’s forces later occupied Winburg without opposition. The battalion continued marching each carrying minimal supplies, a blanket, mess tin, water bottle, haversack and an appropriate amount of ammunition.

At Kronspruit Albemarle expressed dismay at the way the troops were fed, ‘the meat is often uneatable, and it would be just as easy to eat india rubber. Tea and coffee are short. Bread we rarely see. Vegetables are unheard of, and it is most important that the troops should have them or lime juice, if they are to march from 12 to 18 miles a day in addition to fighting’. While tea and coffee may seem like luxuries to us today, British troops often had to depend on it since water was often disease-ridden and attracted malaria-carrying mosquitos. To make matters worse Albemarle’s troops were forced to spend the ‘bitterly cold’ and frosty nights in one blanket. Despite his men being uncomfortable however Albemarle ‘never heard a grumble’.

When Albemarle’s men attacked at Doornkop the main body of his battalion remained under cover while the mounted infantry were subjected to shellfire upon the heights of Florida, a suburb of Johannesburg. Soon the main body marched upon Florida. As the men approached closer however the Boers fired more accurately and their shells ‘burst most unpleasantly over the battalion’ their objective to Albemarle being ‘the extinction of the 76th Battery’. Briefly the men thought that Albemarle himself was hit, but he had just tripped over a stone causing him to roll ‘over and over’.

Before long the battalion was camped north of Johannesburg, things seemed to be quiet for the men before a woman ‘came shrieking towards us’, crying that two drunken soldiers had entered her house. In the long time it took for the town guard to arrive Albemarle and Ted Trotter were forced to tackle them and remove their bayonets, ‘Altogether, it was rather an undignified position for officers to find themselves in’, Albemarle commented before the two culprits were taken away. There were no major incidents among the men which occurred afterwards and the Earl expressed happiness when the mess cart was finally replenished in time for the battalion’s move to Pretoria. It would not be long however until the men were faced with danger yet again.

The battalion soon found themselves at Diamond Hill, not long after General Airlie had been shot there. The enemy was still in position and could be seen placing guns along the crest of the hill. Albemarle and his men were forced to spend the night near Boer occupied territory. As meals were prepared for the men the British guns fired upon the Boers above although it would be at least two hours until the foe actually responded. The challenge then was to locate where the Boers actually stood. As the men advanced it turned out they were 1,200 yards from the edge of the cliff, where they had a good firing advantage. For 3,000 yards the battalion was exposed. The ‘hellish’ fire became so bad that the men could not make any distinct progress. A soldier by the name of Alt received a wound and went back to have it dressed but was shot in the head and killed upon his return to the firing line. Several other casualties occurred in the fray and the surgeon and stretcher bearers were kept occupied. Thankfully the arrival of the 82nd Field Battery was able to buy some time for the shaken battalion. Soon after the Maxim gun was ‘ordered out’ due to the severity of the rifle fire it drew. Albemarle agreed that the Maxim gun was indeed, ‘an appendage of doubtful utility’. Boer fire finally decreased at sunset and the troops were ordered to encamp at Botha’s Farm. When the battalion was relieved by the Coldstream Guards, Alt and Private Ives the two men killed in the battle were buried and Albemarle counted about 19 casualties from the fight in total. Reflecting upon Alt’s death Albemarle lamented, ‘I believe he is the 4th generation of his family who has had one of its members killed in his first campaign’. 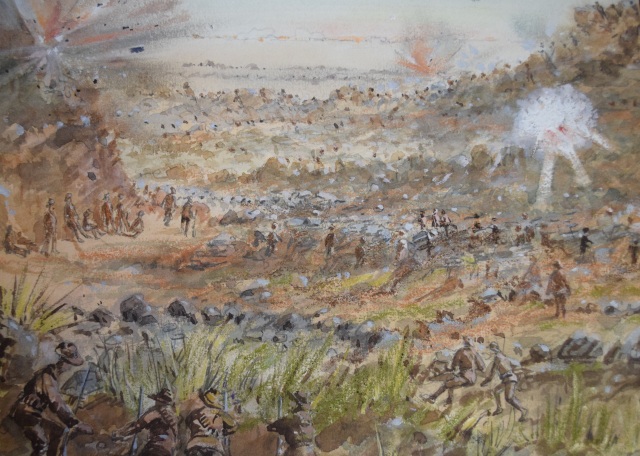 In the next few days it became obvious that many of the men would not make the remainder of the war.

This entry was posted in NRO Research Bloggers, Snapshots from the Archive and tagged Albermarle, Boer War, Conflict. Bookmark the permalink.