Wombwell’s Travelling Menagerie: How animals have inspired art in the archives

Visits by travelling circus companies were popular and eagerly anticipated in Norwich throughout the nineteenth century. Many of the early shows were menageries which displayed many different species of animal. Early menageries to visit Norwich included Polito’s, who displayed his animals in the Dukes Palace Yard in 1803, Hylton’s Menagerie and Wombwell’s Royal Menagerie.

Brought to Norwich by horse drawn wagons, Wombwell’s Royal Menagerie was one of the most well known travelling shows. The displays of exotic and unfamiliar animals bought from abroad by the proprietor, George Wombwell, appealed to the public, with animals including elephants, ostriches, leopards, bears and tigers found on display. For most nineteenth-century Britons this would have been their first encounter with animals of this kind. When the animals died, Wombwell would either exhibit their dead bodies or get them stuffed and put on display. At the height of his success he ran three travelling menageries displayed simultaneously across the country.

In 1972, T.C. Eaton deposited a number of drawings of Wombwell’s and Hylton’s Travelling Menageries at the Norfolk Record Office. These were created in the 1840s after the menageries had visited Norwich and were designed for George Clayton Eaton (born 1834) to play with. Many of the drawings were assembled on card with tabs, so that they could be propped up to form a procession of exhibits. There is also a performing elephant with its trunk and legs jointed together so that it could perform the tricks which had impressed George during the show. George kept the drawings in a hand-stitched folder on which was written a musical score with the various animals noted.

This week the Outreach and Education department of the Norfolk Record Office has worked with children and families to create animal puppets and masks inspired by the drawings of the travelling menageries from the Eaton Collection. Below are a few examples of the work that was created. 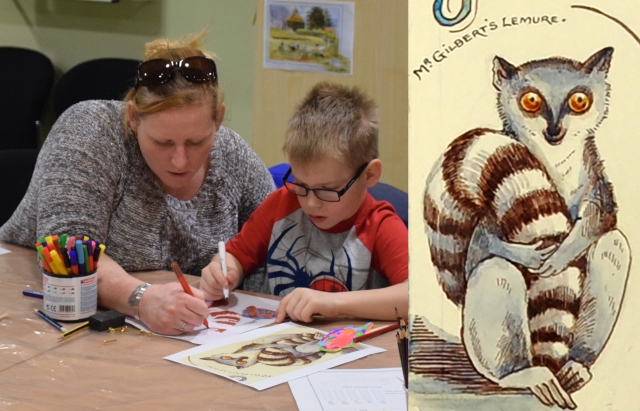 Creating a moving lemur puppet, inspired by a drawing in the journals of Hilda Zigomala, June 1906. NRO catalogue number  MC 2738/11. 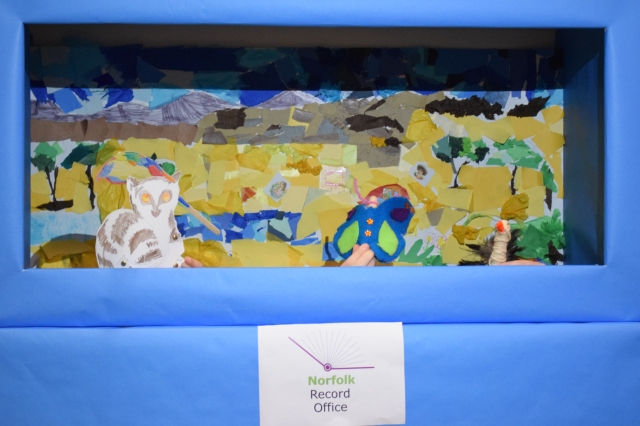 Some of the puppets on show against a backdrop collaged by the children.

A selection of masks inspired by animals, both real and mythical, in the archive. 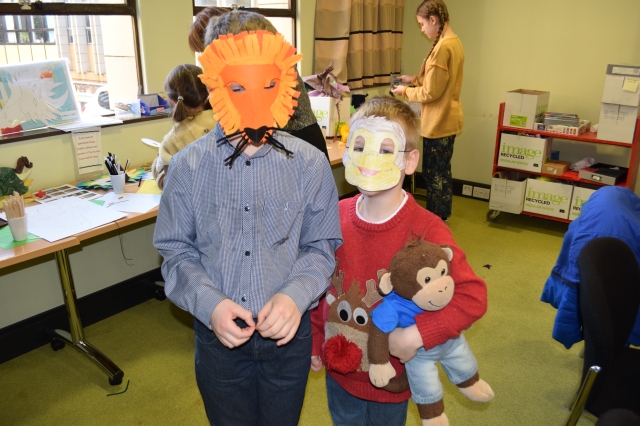 8 Responses to Wombwell’s Travelling Menagerie: How animals have inspired art in the archives