Corruption always tends to capture our interest- reading the tabloids indicates that- and it is very easy to identify what looks like corruption when we research documents from the past. We tend to forget that in previous centuries different rules applied, and what was legal and acceptable then would not be today with the progress that legislation has made. Two recent such instances have been when I was researching the long drawn out saga of the history of Snettisham Farm and the story of the Angel Inn.

There was a link between these two stories in the person of William Bagge, who was Mayor during the Snettisham Farm episode that I reported.

To go into great detail would be repetitious, as the whole saga has already been published, but perhaps a short recapitulation of some important points might be in order.

As related previously, after considerable neglect by the previous tenant, Robert Ward, Snettisham Farm was refurbished at some expense, and a 21 years lease granted to William Curtis in 1781. Curtis haggled about the condition and managed to have the rent decreased, although the Council threatened to advertise for a new tenant.

Unfortunately, Curtis seems to have been no more successful than his predecessor and fell behind with his rent to the tune of several thousand pounds, a huge sum in those days. Moves were made to have the lease terminated, leading to a series of letters to the Mayor and Council. These, and many other records relating to the farm, are catalogued in King’s Lynn Borough Archives as KL/C 50 Af 240.
Curtis referred several times to his dire situation and talks of “putting at least a thousand pounds into your pockets”. He does not specify whom he means by “your”, but as he was writing to the Mayor and Congregation, the suspicion is that he meant them. The Mayor at that time was William Bagge. 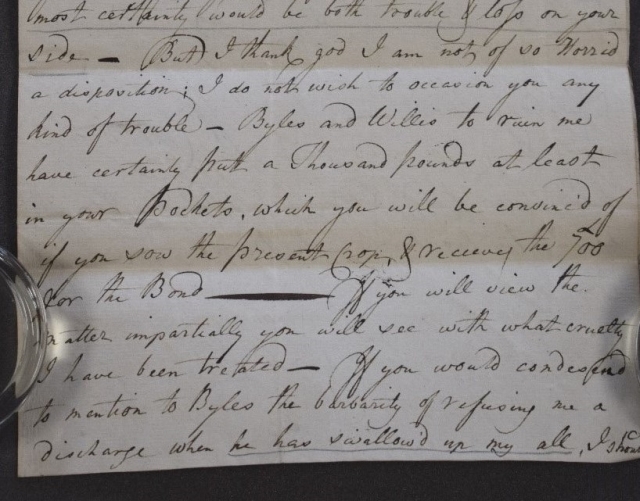 Curtis accuses John Willis, one of his guarantors, and his agent Byles of trying to ruin him, and at one point his assets were seized by the Sherrif. There was also a dispute about seed which Curtis had sown, which the new tenant did not pay for.

Curtis accused the Council of malpractice, however, before we take his side of the argument it is worth spending a little time investigating him. After giving up his lease to the Farm, he served time in debtors’ prison. Indeed he wrote to the Mayor in 1786, appealing to him to help get him out of prison. In spite of the previous dispute money was given to him and his freedom achieved. 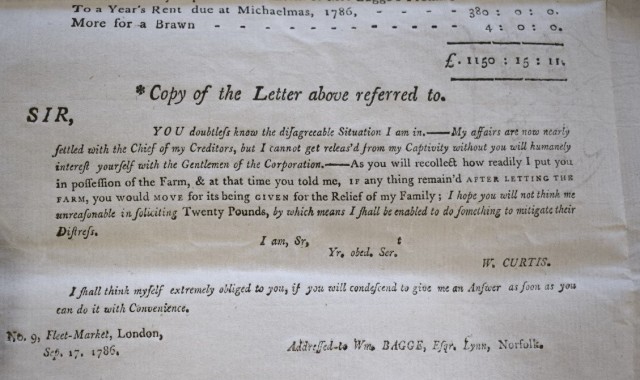 Copy of the letter written by William Curtis to the Mayor William Bagge appealing for financial support. KLBA, KL/C 50 Af 240 003.

At this point, we might think we had seen the last of Mr Curtis, but he does re-emerge eight years later. In the collection of King’s Lynn Borough Archives is a printed book, published in 1928, by T.L.G. Burley entitled Playhouses and Players of East Anglia, which refers to an incident at St George’s Guildhall. The Guildhall is in Chequers Street, now known as King Street.

Curtis was attending a performance at the Guildhall and was at the centre of a fracas. He refused to stand and remove his hat when the cast sang the National Anthem. Two soldiers, a Major Walter Partridge and a Captain Henry Powell (Powlett in the Quarter Sessions and Legal Suit papers) who had seats behind Curtis, laid hands on him to force him to do so. Perhaps, as he contended, having paid for his seat, he had a right to sit on it as he pleased. 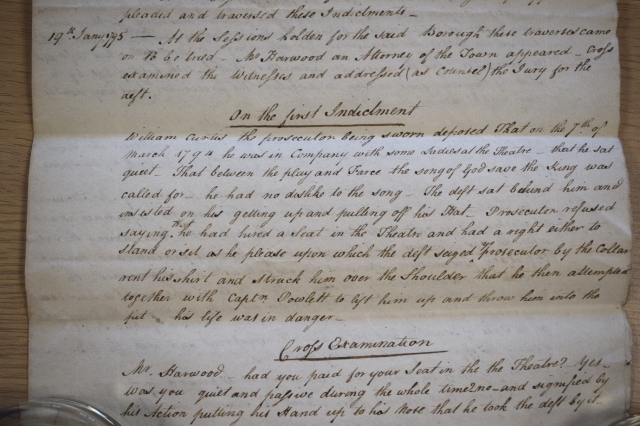 It was not however a sensible idea to get involved physically with two professional soldiers and to tweak one of their noses! A witness reported that blows were exchanged which Curtis used to press assault charges against the men. Later Henry, acting as Walter’s second, challenged Curtis to a duel. This put him in fear for his life and for the wellbeing of his wife and children, and so he refused to fight.

The case went before the Borough Quarter Sessions in July 1794, the write up of which can be seen in KL/C 20/4, but did not finish until the session of January 1795. It is interesting to note that it was actually Walter Partridge that appeared in court rather than Henry Powlett as Burley suggests. Partridge was fined 1 shilling for the assault and £10 for challenging Curtis to a duel.

In Curtis’ view, the soldiers got away lightly. As the Recorder, Isaac Preston, said he understood the soldiers’ patriotic zeal and imposed the lightest fine. Curtis then slandered the Recorder and his professional ability. 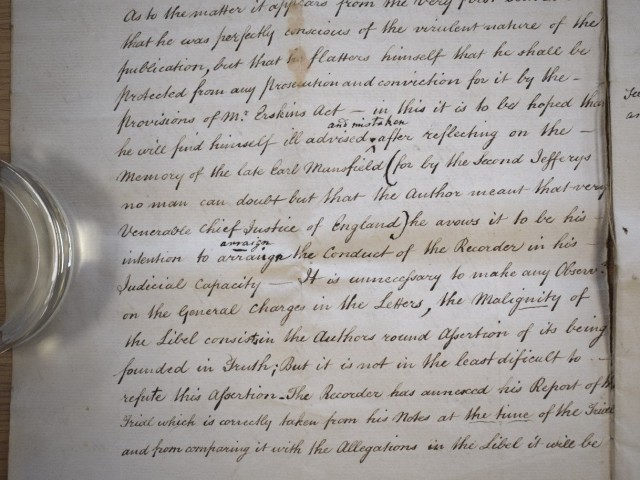 It seems that he published a flyer, and chose his moment to distribute it, when there was a “visitation of Archdeacons” in the Borough in April 1795.

Curtis seems to have convinced himself that he was somehow immune from the legal consequences of his actions. However, a libel case was brought against him which went before the Court of King’s Bench and there seems to have been a dispute as to whether his solicitor actually wanted to represent him. He was summoned before the Bench to receive judgement in November 1795 and as there was some dispute as to whether he would comply he was threatened with being seized and taken to London. He submitted, but even then gave his tongue free rein, not wanting to go to London with “such unpleasant company”.

This case was not a solitary incident as in August 1795 Curtis also had a campaign against the Mayor about the quality of bread sold in King’s Lynn. He was suggesting that the Mayor and Council were forcing local bakers to use flour from inferior quality wheat. Not only that, he suggested that the Mayor had some financial interest in doing so. His choice of language can only be described as intemperate. 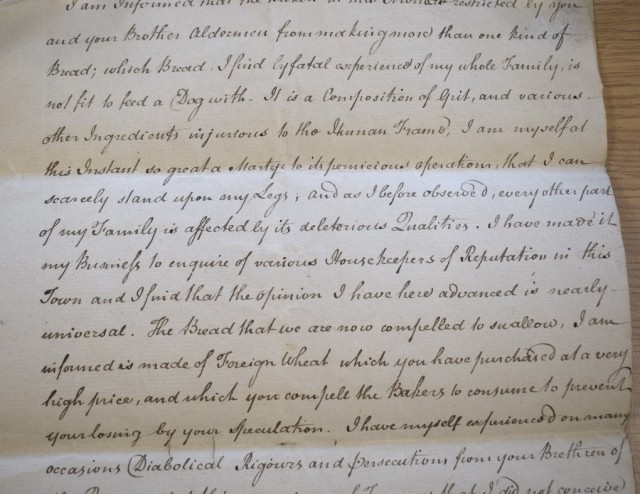 Perhaps the last word should go to the Isaac Preston, the Recorder of Lynn, at Curtis’ trial. He points out that Curtis, after his release from prison, had lived in the town with no apparent means of supporting himself or his family, comparing him unfavourably with his brother. He goes on to describe him as a man of despicable character, and something of a habitual libeller and complainer.

We should therefore take Curtis’ earlier complaints and accusations with a pinch of salt.