Legal Battles, Prison Sentences and Requests for Prayers: The Stories of the Owners and Occupiers of Snettisham Farm

King’s Lynn Borough Archive has a huge collection of ancient documents on all manner of subjects, among which is a large series relating to Snettisham Farm. The Farm has a very chequered and interesting history, with one occupier ending up in Fleet prison following a long legal battle and a long term owner being accused unfairly deposing of the land.

It was not just a farm- it was a huge estate stretching at its peak from Lynn to Heacham and inland to Sedgeford and Fring. I have not been able to find a map showing the whole estate in detail- it could have been isolated pockets of land rather than one uninterrupted swath.

The earliest reference comes in before 1290, when Geoffrey de Snettisham made a grant of land to Richard, son of Haman de Snettisham (KLBA, KL/C 54 AF 1) 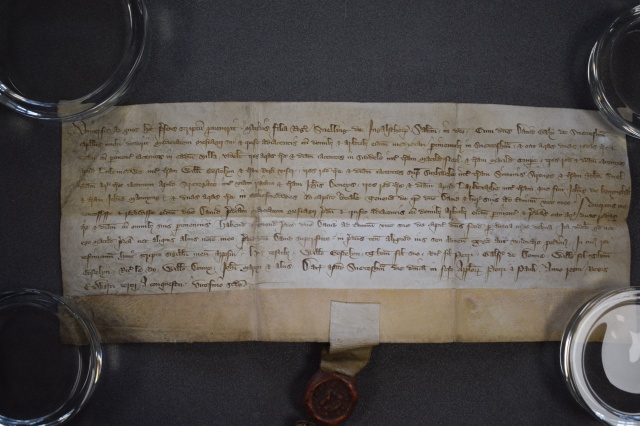 Over the centuries there are numerous other documents, until 8th March 1512, when there is a document transferring the Farm to Joan Amfles. Joan was already a widow at that point- she possibly bought the Farm with the proceeds of the will of her late husband, William (KLBA, KL/C 54 AF 41)

At this point, the course of our story takes a diversion to look at the Amfles family, who at one-time owned Hampton Court, in Nelson Street. Hampton Court is a glorious old building, dating from about 1350, with further additions about 1440, and 1470. In 1482 William Amfles made over Hampton Court to his son Richard as referred to in the Hall Book, (Nelson Street at that time being known as Lathe Street) (KLBA, KL/C 7/6)

Over the Nelson Street entrance to the property there are two carvings. The one on the right is said to be the Amfles coat of arms, while the one on the left is thought to be a riddle revealing the Flemish origins of the family.

Carving above the entrance to Hampton Court

What we do know is that they were wealthy merchant brewers, and there are a number of documents relating to the lease of various pubs, such as The Angel, on Butchers’ Row on Saturday Market Place.

Joan died in 1530, and left Snettisham Farm to the Guild of the Holy Trinity on condition that prayers be said in eternity for the souls of herself and her late husband William. The Guilds were groups of wealthy merchants who came together for mutual support and benefit. We have documentary evidence of nine in Lynn, but it is thought that were as many as 70 at various times.

The story did not end there though. I am no great fan of Henry VIII- indeed, if one reads the information boards near the tombs of two of his wives in Peterborough Cathedral, he comes across as cruel, uncaring, and altogether unpleasant, to put it extremely mildly. In 1538, though, he did something I regard as A Good Thing (to quote from 1066 and all that)– he set rolling the Reformation, though it was purely from selfish motives. Among the consequences was the confiscation of huge swathes of Church property, which impacted on those guilds of a religious nature, such as the Holy Trinity. And so, King’s Lynn Corporation became the new landlord of Snettisham Farm.

There are thereafter many references to the Farm in the Hall Books. The Archive also holds many documents of all kinds, from small chits with expenses claims right through to indentures addressed to the king himself. There are two large bundles, (KLBA, KL/C 54 AF 240), which supply the information for this part of the farm’s story.

What should have been a considerable asset to the Corporation turns out to have been anything but. It becomes apparent that in 1784 a Mr William Curtis became tenant of the Farm. Somehow, he was allowed to run up debts of £3,600, a vast sum in those days. He had two guarantors for his tenancy; Mr Willis and Mr John Curtis of Summerfield, possibly a relative. He left them with debts and a significant amount of building and repairs, including what seems to have been a substantial farmhouse. Several bills were presented to the council for work done for Mr Curtis.

Looking at this episode overall, it appears that what should have been a source of considerable revenue for the town was rapidly becoming something of an albatross. There had been considerable debate concerning a proposal by the council to increase the rent on the Farm, and Curtis stubbornly refusing to agree. It is worth pointing out at this stage that there had been considerable expenditure necessary for repairs to the farmhouse in 1780- that is, before Curtis was granted the lease.

On top of all this, Curtis, who by his own admission was perhaps not up to the job of running the Farm properly, was in debt not only to the council, but also to his two guarantors. One letter shows they were left with a very poor opinion of him.

Eventually, legal action was instituted by the Council, and there are several documents outlining the council’s case against their tenant. The appeal went right to the top, with an Indenture addressed to the king himself. Things were getting quite heated, and one document on the corporation’s side refers to “suspicious circumstances”. On the other side, Curtis wrote a number of letters, at times playing the sympathy card and complaining of his poor health.

He says that he is not, like his opponents, “a man of property”, but that the council would struggle to find an equally good tenant elsewhere. At one point it sounding as if he were accusing the Mayor William Bagge of corruption, “have put £1,000 in your pockets”. He refers to Byles and Willis of trying to ruin him. Mr Byles was the agent of the late John Willis.

Finally, Curtis was induced to surrender his tenancy agreement on April 14, 1786. A further document indicates that there was work to be done to make the farm fit for a new tenant.

Curtis himself was also in a bad way; he wrote to the mayor appealing to him to get him out of the notorious Fleet Prison which held debtors and those who had become bankrupt. All in all, a sorry episode of mismanagement: a tenant appointed who was perhaps not up to the job, inefficiency in running the farm, disputes over rent, debts, accusations of mismanagement and corruption and Mr Curtis ending up in gaol.

Letter from William Curtis in Fleet Prison on appeal to the Mayor of King’s Lynn, 1786. KLBA, from KL/C 54 AF 240 bundle

Disposal of the Farm

After further financial losses, the council decided to dispose of the Farm. There was an initial proposal to exchange the Farm for another, rather than just sell it, but that came to nothing, and sale of the Farm was back on the agenda. Controversy arose again with some saying the Farm should have been auctioned instead of treated as a private sale. There was also much opposition to the sale from the emerging Independent Labour Party. As well as debate in the chamber, they organised a petition. 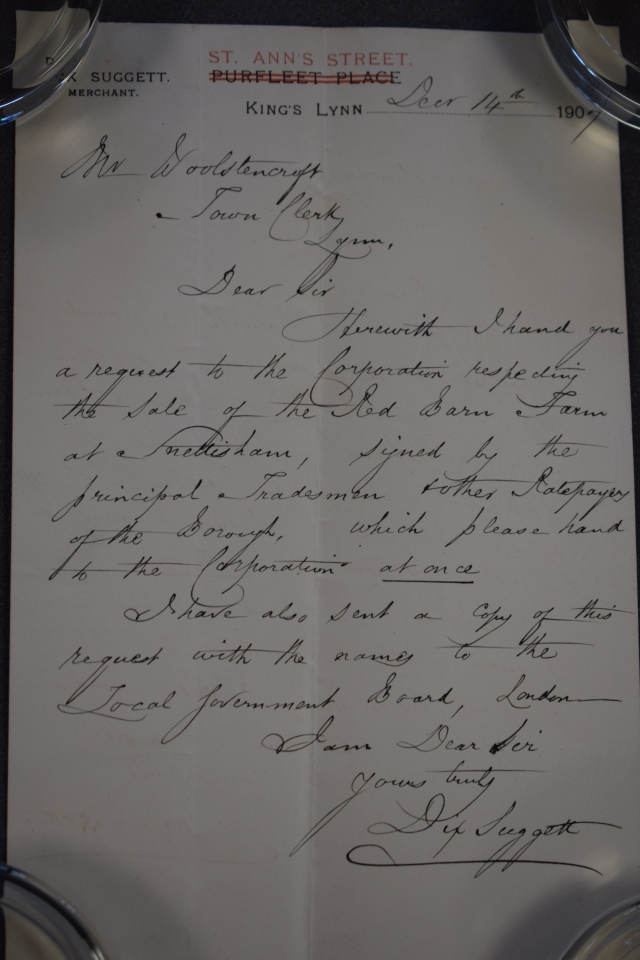 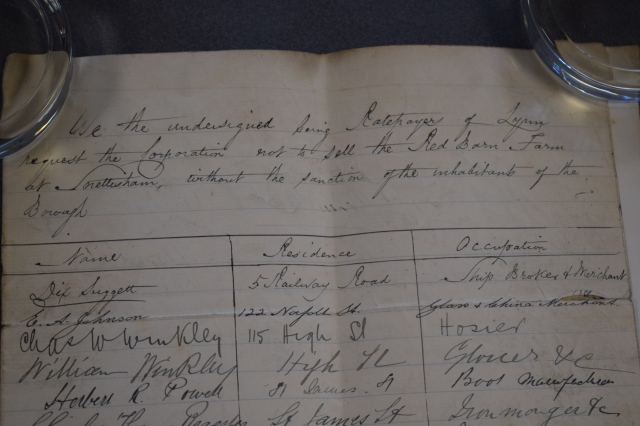 Be that as it may, the sale was approved, although it was necessary once again to appeal to a higher authority. In this case the Local Government Board, whose approval was duly granted after an inquiry. 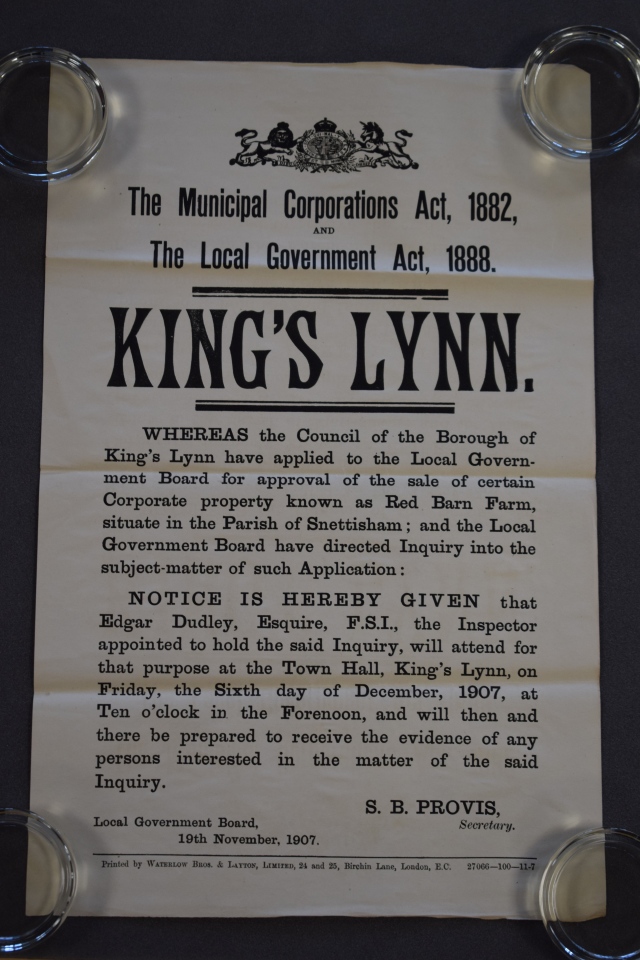 I gain the impression that the Farm was sold off piecemeal. In 1871 the Old Hall estate was sold to Sir Edward Green, an engineer from West Yorkshire who in 1878 to 1880 had Ken Hill House built as a retreat. He married Mary Lycett and adopted her family name alongside his own. He became 1st Baronet of Wakefield and Ken Hill.

In 1907 the Council sold the Red Barn Farm at Snettisham for £13,000 to Sir Edward Lycett Green. Sir Edward’s great grandson inherited the estate in 1941. Sir Stephen was very generous and permitted access to local families. I can remember in the 1980s villagers walking with dogs and children to picnic in front of the big house and back home via Ken Hill Woods, and there was open access to the track of the old railway line between Heacham and Snettisham.

One part of the estate can still be seen by the public; Snettisham Watermill mentioned several times in the documents, has been refurbished and modernised to become a very attractive house.

This entry was posted in Uncategorized. Bookmark the permalink.

5 Responses to Legal Battles, Prison Sentences and Requests for Prayers: The Stories of the Owners and Occupiers of Snettisham Farm