The Work of an Archivist

At the very beginning of this month, the Education and Outreach team were out and about delivering our new The Work of an Archivist workshop to the Year 5s at Mundesley Junior School.

The workshop explores the work of not only the archivists but the conservators, the searchroom team, the digitisation team, the strongroom team and of course the education and outreach team here at the Norfolk Record Office.

We started by playing a game based on a type of document called an indenture,  this was an agreement between two people written on one piece of parchment and then cut with a zig zag line so both could keep a copy of the document without fear of fraud.   The game involves finding the other half of your question/answer, having fun and finding out more about the Norfolk Record Office (NRO).  The children discovered many interesting facts including;   the NRO looks after over 12 million documents and that our oldest document is over 900 years old. 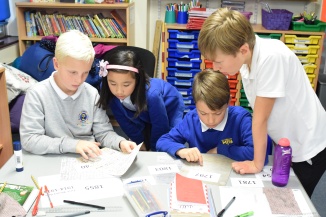 Our second activity  gave the children the opportunity to look at copies of documents and put them into chronological order.  The documents included letters from Nelson, a 19th century letter from a child to an uncle and a document to fill in if you were injured during the First World War and our oldest document.  The children showed impressive palaeography skills.

We next explored how to handle documents, thinking about what we could do to prevent the documents from any damage e.g.  having clean hands, using pencils not pens, not leaning on documents.

Putting into practice what we have learnt today.

The final activity put into practice what we had learnt during the day, thinking about the Journey of a document from attic to archive.

Find out more about our free workshops for schools here