Lord Willoughby and ‘the time of rebellion’.

The King’s Lynn Borough Archives received a request for information regarding an ‘apparent uprising’ in West Norfolk in 1548, which was described by Francis Blomefield in 1728. On researching this uprising the archivist discovered a number of references within one of the Hall Book’s (KL/C 7/6). The Hall Books are a series of large, leather bound books which record the minutes, memoranda and proceedings of the Town Council. The references to the upraising include payments of reasonable sums of money. I was asked to look further into these entries and the ‘apparent uprising’, and these are my findings.

Causes of the uprising

Francis Blomefield wrote about the West Norfolk rebellion, attributing its causes to a reaction against the removal of saints’ images from churches in 1548. This surely would have been in contradiction of the claims by Kett’s rebels that the clergy were not doing enough to advance the reformation.

The Norfolk Places website contains photograph of ‘Kett’s Oak’ on the road between Hethersett and Wymondham. However, there is another Kett’s Oak in the grounds of Ryston Hall, reputedly a rallying point for rebels during Kett’s Rebellion of 1549. 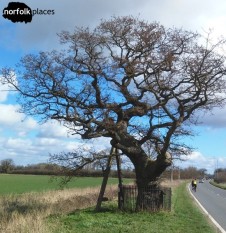 The Rebellion was part of a wave of discontent which swept the country in the late 1540’s; it was partly due to religious issues – the feeling that the Reformation was not making sufficient progress, and discontent with the availability and general level of education of the clergy – and partly economic. The issue here was enclosures – the appropriation of land for sheep farming, which was seen as more profitable for the major landowners, many of whom had gained possession of the church lands which became available after the Reformation.

In point of fact, it appears that Robert Kett himself was guilty of enclosure and a dispute between him and one John Flowerdew gave rise to the uprising round Norwich. With considerable foresight Kett dismantled his enclosures. Although, there are more generous accounts which have him seeing the error of his ways and offering himself as spokesman for the rebels, who began tearing down enclosures in protest at the overgrazing of common land by the landowners.

Kett set up camp on Mousehold Heath, and the rebels actually succeeded in taking Norwich. The forces of authority surrounded the city and ordered Kett to surrender. It was reported that while this was happening, ‘One of the rebels lowered his hose and tauntingly bared his backside. An archer, with ‘commendable accuracy, shot an arrow into his rump.” (from ‘Spartacus Educational’s British History’)

Rather than face starvation under siege, Kett complied, but as the rebels marched out, John Dudley, Earl of Warwick, commander of the king’s forces, sent in the cavalry, the resulting rout seeing the slaughter of several thousand of the rebels.

A special commission was put together to deal with the issue of prisoners, though it has been said that the Norfolk gentry, enraged at what had happened, were not satisfied even by the slaughter of the fleeing rebels. Warwick himself had to step in to stop further brutality, pointing out that the gentry got their wealth from the agricultural classes. He is quoted as saying, ‘Will ye be ploughmen and harrow your own land?‘, an early way of saying ‘Why cut off your nose to spite your face?‘.

Kett and three other leaders, including Kett’s brother William, were arrested and detained in the tower of London. Kett was reputedly twice offered a pardon, which he refused on the grounds that he had done nothing which needed to be pardoned; he was hanged at Norwich Castle on 7th December, 1549.

Effects on the West of the County

The rebellion did not just affect the east of the county though, as demonstrated by the reference to Kett’s Oak at Ryston Hall.

Far be it from me to cast aspersions on the upper levels of society of those times, but Robert Kett himself was, as we have seen, hardly the downtrodden man of the people rising against oppression that he often comes across, and there will be doubts about other players in this drama, as we shall see.

Returning to the earlier uprising and delving into the appropriate Hall Book (KL/C 7/6) and its later transcription (KL/C 7/31) we come across various references to one of the major figures in the West Norfolk rebellion, Lord Willoughby.

Folio 112 of the Hall Book reports:

‘This day there is taken out of the Treasure House to be delivered unto the Lord Willoughby by way of present upon letters directed from my Lord Protector and others of the King’s Majesty’s Council for the furniture of his service here 100 marks.‘

This entry is dated 15th August of the third year of the reign of King Edward VI. Edward came to the throne in 1547.

The next entry of note is folio 118, dated 20th November:

‘Robert Houghton has been accounted this day in the hall for £71.7.9 to him delivered for the payment of the soldiers’ wages in the time of rebellion.’ (I have underlined the key words myself). 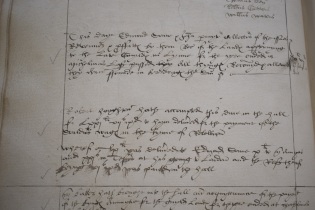 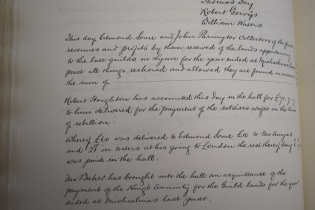 Folio 125 mentions the feast of the Purification of Mary. This feast is also known as Candlemas: it was tradition that Jewish women were kept in semi-seclusion for 40 days after giving birth. If we accept 25 December as the Birth of Jesus, forty days takes us to 2 February, when it is calculated that Mary and Joseph took Jesus to present him in the Temple. The entry reads:

‘On the Friday next after the feast of the Purification of the Blessed Mary Virgin in the 4th year of Edward VI’ (i.e. the Friday following 2nd February, 1550). John Hokes has paid in the hall £53.17.6 in full payment of the arrears of his present account one at Michaelmas last past whereof £30 was delivered to Mr. Mayor and £16.5.8 to the Chamberlains and £7.6.8 towards the payment of such money as was delivered to the Lord Willoughby in the time of rebellion.’ (Once again, I have underlined the key words.) 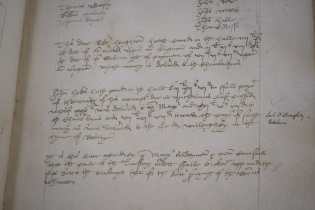 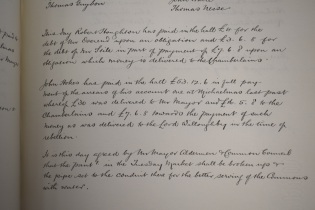 Michaelmas, or the Feast of Michael and All Angels, is celebrated on the 29th September every year. As it falls near the equinox, the day is associated with the beginning of autumn and the shortening of days; in England, it is one of the ‘quarter days’.

Folio 145 is dated Friday 25th day of January in the 4th year of Edward VI:

William Overend and George Amyas are listed in the Hall Book as members of the ‘Congregation‘, and were the two elected Chamberlain’s for the year.

As far as I can work out from various sources, including an excellent website run by the Castle Rising History Group, these entries from the Hall Book, gives details of some of those who played a major part in the events.

Jackie Morrallee has an excellent site, which was researched in conjunction with the Castle Rising History Group. Reading through it, it seems that unrest had been breaking out throughout the country, and throughout Norfolk a year before Kett’s Rebellion.

It was reported that one of the Fermours of Barsham was killed during the riots in the west of the county. This was, I believe, Sir Thomas. This is also noted in Walter Rye’s book Norfolk Families.

The Fermours held land at East Barsham, some of which they had acquired after the dissolution of Hempton Priory. They had something of a record of bad behaviour in their pursuit of expansion to the detriment of tenants, and Sir Henry Fermour stood accused of overgrazing the whole of the common land when he only had rights to a certain acreage and a certain number of sheep. This was as far back as 1520, so the unrest had been brewing for many years.

Sir Thomas was connected by marriage to the Cootes of Blo Norton, one of whom was, some 10 years later, ‘attainted for coining’, and though he was acquitted, it seems he was on the run from someone or something when he drowned in the Thames while trying to escape by boat. We hear in the news these days about criminal families, but it seems that it is by no means a new phenomenon!

Lord Willoughby’s Defence against the Uprising

Things came to a head and erupted in 1547. Malcontents from villages around Fakenham gathered, and they are reported as setting up camp in Rising Chase, a royal hunting area since Norman times. Various local spots have been identified as being what came to be known as Kett’s Castle.

Enter Lord Willoughby. The family are to be found back in 1334 in Lincolnshire. One of them fought at Crecy, and advantageous marriages through the years helped establish family fortunes.

William Willoughby was in service with the Duke of Richmond in 1536; he served in Parliament representing Lincolnshire and was raised to the peerage. He was certainly connected with John Dudley, Earl of Warwick, before the ‘time of rebellion‘.

There was apparently a plan afoot for the rebels in Castle Rising to mount an attack on King’s Lynn, but Lord Willoughby, leading a force comprised of the local gentry and paid for with the help from King’s Lynn, managed to thwart it.

Jackie Morrallee reports that the rebels moved south to Downham, which is where the Kett’s Oak of Ryston Hall comes in. It was, we are told, a rallying point for the rebels, but following what must have been something akin to a kangaroo court, the ‘Reformation Oak‘ was used as a gallows tree, giving rise to a rhyme:

Having completed his work and cleared the camp at Castle Rising, Willoughby moved a sizeable force of loyalists to Walsingham, where he joined forces with the Earl of Warwick, and the combined force moved eastwards to tackle Kett’s uprising in Norwich.