When I was very young- and we’re talking now of the early 1950s- my grandad, who’d served in WW1 with the Bradford Pals in the West Yorkshire Light Infantry, gave me a German Iron Cross which he’d brought home from a battlefield- the Somme, if my memory serves me rightly. Later on, I realised from the Emperor’s name inscribed on it, that it was in fact Austrian. I still have it among the “heirlooms” in my “treasure box”.

I never really gave much thought as to how prevalent such souvenir collecting might have been until I was working on the History of King’s Lynn Museum, and saw from records just how much was offered to museums after the two World Wars.

Still less did I realise that similar activity happened on an official basis- I learned of the existence of the War Office Trophies Committee (WOTC), whose remit was the distribution of captured enemy booty. I was intrigued by the story of Lynn’s tank, and working in the Archive gave me the opportunity to find out more.

In 1919 the Town Clerk reported the distribution of captured enemy stores, and the receipt of a German machine gun as part of the allocation to King’s Lynn. In March 1919, the Mayor offered the gun, presented to the Town by the Lord Lieutenant of the county, to Lynn Museum Committee, and it was accepted. One assumes that the purpose of the offer was for it to be put on display, much, one could think, as the Ancient Romans did in their conquering generals’ Triumphs.

In May the same year, the WOTC offered another machine gun, claimed by the 9th Norfolk Regiment, “for safe custody and care of the corporation.” This was presumably for the corporation to take into custody, as with the previous one, rather than to ensure the “safe custody” of the corporation! Whatever, this gun was also accepted. It went to the Museum on 19/05/1919.

At the end of May 1919, the WOTC offered a captured German field gun and carriage to the town. It was recommended that the gun should be accepted, and housed in the same enclosure, next to the Public Library on Greyfriars’ Road, as the “Presentation Tank”, which had previously been offered. I initially misread the Museum Committee notes, and mistakenly assumed that the tank also was German.

In June, the Council had second thoughts, and decided not to accept either the tank or the gun, and in July, they decided to accept the tank, but not the gun. The tank was sited in a railed enclosure opposite the Library, next to the fountain in St James’ Park.

Interestingly, there were various proposals to use part of St James’ Park for an aliens’ internment camp. There was much debate for and against, but eventually it was approved. It seems, to say the least, a little lacking in tact by today’s standards to place a tank in full view of captured enemy soldiers, smacking a little of triumphalism and jingoism, but then, the country had just gone through what was in effect the world’s first total war, with civilians being targeted, and Lynn itself being on the receiving end of air raids that caused civilian deaths and damage to property. One can only hope the tank was fully deactivated!

Further research, and my thanks here to Kevin Hitchcock of King’s Lynn Library Service, reveals that the tank was, in fact, a British Mark 1. The Town Council minutes of 9th July, 1919 simply refer to “The Presentation Tank”. 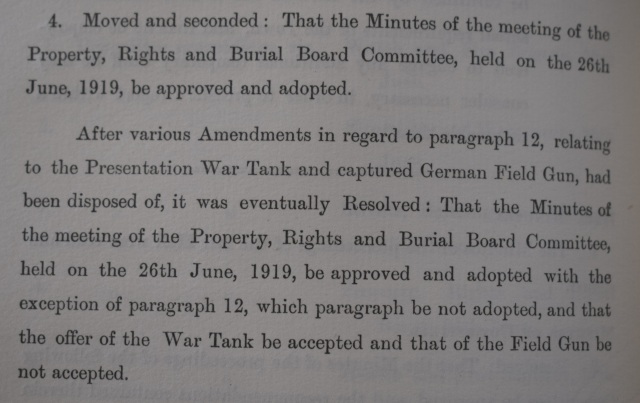 In his book, A Portrait in Old Picture Postcards, Simon Massen describes the position of the tank as being near the fountain in St James Park. In this picture, a postcard from 1920, the tank can be seen in the distance, to the left of the fountain. 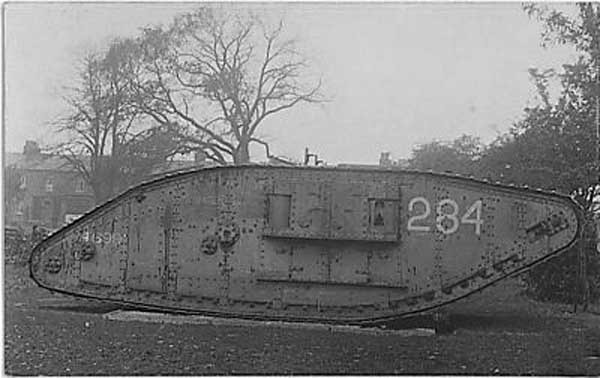 It was placed there “as an attraction”, but rumour has it that it was, over the years, shall we say, “treated with disrespect” by men on their way home from the pub, and it began to rust away.

The tank was still there in 1928, when it was decided that the town should dispose of it. There had been considerable debate about its fate, as these letters from the Lynn News in 1927 show.

It was initially recommended that an offer of £2 from Messrs Savages Ltd should be accepted, provided that they should pay the cost of removal and be responsible for all damage, and that the corporation should remove the railings round the tank. In a way, it was like turning swords into ploughshares, I suppose- nice to think of a tank being transformed into part of Savages’ famous fairground rides, but it was not to be.

After further debate, Savage’s off was rejected in favour of that of £15 from Mr. R. E. Palmer, and there the story, for the time being, must rest.