From Gunpowder to Fire Engines: The Role of the Cannonier in looking after Norwich’s seventeenth-century fire Fighting Equipment

Today, the Norfolk Fire and Rescue Service protects Norwich, along with the rest of the county, using dozens of emergency vehicles and a range of advanced equipment. In the seventeenth century (when most buildings were made of wood) the technology involved was rather less advanced – but that did not mean there was no organised defence against fire. On the contrary: a court petition in the newly-catalogued Norwich City Records collection reveals that by 21 September 1691, the city of Norwich was protected by no less than six fire engines, all under the command of one man – Jonathan Barton, the city’s cannonier, or gunner. 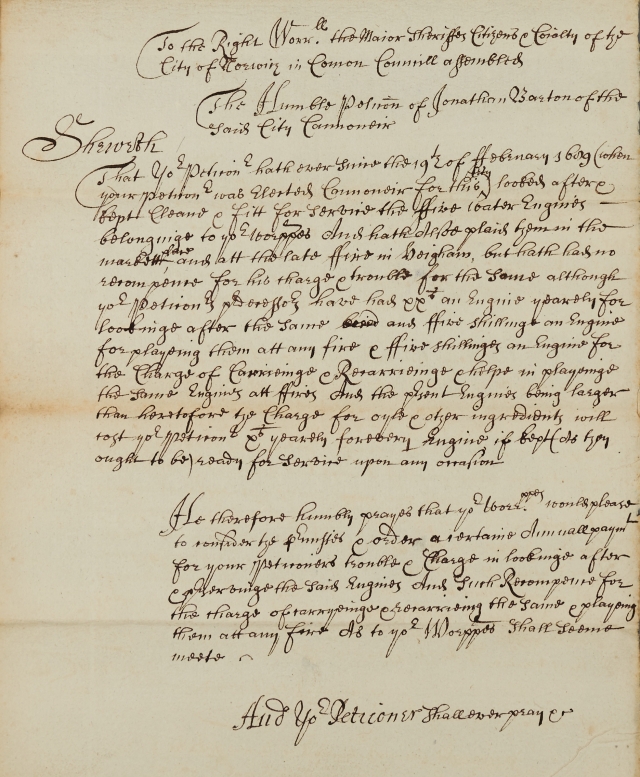 The cannonier’s traditional responsibility was for matters concerning the city’s guns and gunpowder, chiefly fired during the celebrations of certain anniversaries, such as Guy Fawkes’ Night, and at other times as occasion required. One example of the duties a cannonier might be called upon to perform is an order from July 1685

‘to draw out the 5 brasse guns and cause them to be fyred upon the 26th daie instant beinge a daie of publique Thanks-giveinge… for the defeate of the Rebells in the West of Englande’ – that is, the Duke of Monmouth’s famous rebellion (NCR 16a/25, f. 187r).

Barton was not the one responsible for firing the guns to celebrate the defeat of Monmouth’s rebellion: he was appointed cannonier in February 1690 (1689 in Old Style dating). The record of this in the Mayor’s Court book says that it was ‘in the place of Burges, late deceased’, and that Barton was to have ‘such salary profits and advantages as his predecessors have had’ (NCR 16a/25, f. 262r ). But it seems this was insufficient, for his petition says he

‘hath ever since loked after the Engines to Quench fire belonging to this City being now six Engines. And hath been at great charge in playeing the said Engines att Heigham fire & for takeinge the same in peeces severall times & in giving his attendance & direction for the amending of such of them as have been out of Repaire & for oile & severall other thinges used about them to the great charge of your peticoner of which your peticoner hath not rec[eive]d any thinge’.

This was not Barton’s first stint as cannonier, nor was he unpractised in maintaining and deploying fire engines. Records of the Mayor’s Court show that as early as 1668, the Norwich Corporation had at its disposal an ‘engine’ which was kept at New Hall along with brooms and ladders for firefighting (NCR 16a/24, f. 73r). This machine was ordered to be repaired in October 1675 (NCR 16a/24, f. 330r). A record of 23 October 1675 finds Jonathan Barton being elected to the post of cannonier for the city. His salary, fixed on 30 October 1675, was ‘10s per annum for ye keepeine ye fyre engine fit to use, and when it is drawn out upon ocasion of Fyre he is to have for the same what ye Court shall iudge mete and 10s for each of 3 anniv[er]sarys of ye 5th of November, ye Coronation & ye restauration of his Maiesty & 40s of St Georges Companie as hath beene accustomed’ (NCR 16a/24, f. 332v).

A second engine was purchased in 1679. In July of that year, the Mayor’s Court resolved that Robert Bendish, esq, an alderman of the corporation, would ‘contract with Mr Fromantel of London for an Engine to Quench Fyre at the cheapest rate he can… which Engine is to be sent downe by Mr Fromantel at his charge to this City by sea or otherwise as he thinks fitt’ (NCR 16a/25, f. 51v). Fromantel was to be paid the agreed rate if the engine succeeded in a trial; if not, it would be returned at the city’s charge. The machine duly passed its trial in September, and on the 27th of the month, Bendish was ordered to pay out £9 for it. Fromantel, a clockmaker, was also contracted with for a steel pendulum for the New Hall clock. His son, Daniel Fromantel Jnr, who appears in the records of the Mayor’s Court in connection with the Dutch Congregation prior to taking this new employment, was hired to ‘take care of the two water engines to keepe them in good order & ready to worke’, as well as ‘from tyme to time to take care that the clocke at the New Hall be kept in good order and repaired by him when ocasion requires’ (NCR 16a/25, f. 54v). For these duties he was paid 40s per annum, quadruple Barton’s starting salary, but there is no mention of reimbursement for firefighting duties. The engines were ordered to be stationed at New Hall. It is not clear when the younger Fromantel ceased to look after the fire engines (and the clock). Perhaps it was once the corporation were satisfied that they could be operated and maintained by local officials.

As we have seen, in the twelve years between that second purchase and Jonathan Barton’s petition for remuneration, at least another four engines were bought. But, as Barton’s petition indicated, the machinery was by then in a bad state after years of service. That the corporation also considered their condition unsatisfactory at around this time appears from an order made in June 1691 to withhold the £9 remaining in hand for payment until ‘satisfaction be made… for defects found in and reparacions done to the said Engine and til security be given for keeping the same in Repair for 2 years according to the Agreement upon sale’ (NCR 16a/25, f. 277v). The £9 value of the engine that had not yet been paid for suggests a continuing business relationship with the Fromantels, who had charged that amount for the 1679 engine. The state of disrepair they had fallen into does not necessarily mean that Fromantel’s work was shoddy; perhaps Burgess, the cannonier who preceded Barton in the role, was negligent in looking after them. Besides, these early fire engines would undoubtedly have been complex and sensitive pieces of equipment.

The upshot of all this was as Barton’s petition describes: he footed the bill for repairs himself, and was forced to petition the city to reclaim his expenses. Not unreasonably, he also asked for an annual salary as a firefighter, as well as a cannonier. Sadly, it does not appear in the Mayor’s Court records that his petition was successful!