A military wedding at Great Yarmouth and a mutiny

For couples where the groom was serving in the military, time could be of the essence to marry before his regiment moved on, or ship sailed again and many military occupations are represented in marriage licence bonds.  This is particularly true for the Archdeaconry of Norwich bonds which cover the port areas of Great Yarmouth and King’s Lynn.

One bond, dated 17 March 1798, relates to the marriage of John Smallcom, widower and Mary Ward, widow, in Great Yarmouth.  The bond does not say which church they married in but, at this time, only St Nicholas’ Church was licensed for marriages and the parish register confirms that John and Mary’s wedding took place there the next day.

The marriage licence bond leads us on to discover the history of John Smallcom’s ship, HMS Director. It appears that the ship and her crew had a short but colourful period of active service before she was broken up at Chatham in 1801 and we can only speculate whether John Smallcom was on board at the time.  In 1797, HMS Director was involved in both the Nore mutiny and the battle of Camperdown.  We know that the will of John Smallcom, of HMS Director, dated 1796, is held at The National Archives and John still lists the Director as his ship in this marriage licence bond of 1798, so he would have been aware of these events at the very least.

HMS Director was originally a 64 gun ship, designed by Sir Thomas Slade (the same man who designed HMS Victory) and built at William Cleverley’s shipyard in Gravesend. Ordered at the height of the American War of Independence in the early 1780s, by the time HMS Director was built the war was over.

In January 1796, HMS Director sailed under Captain William Bligh (of mutiny on the Bounty fame) and by 1797, she was part of the North Sea Fleet.  Her crew took part in the mutiny on the Nore when, encouraged by an earlier mutiny in the Channel Fleet at Spithead near Portsmouth, sailors at the Nore took control of their ships in May 1797.  The mutineers made many demands including payment of wage arrears, better working conditions and the removal of some of their least popular officers.

Other documents, held at the Norfolk Record Office, give eyewitness accounts of the mutiny.  Several letters sent from J.J. Gurdon, an officer of the militia at Sheerness, describe the day to day events of the mutiny as it unfolded.  In one letter, dated 29 May 1797, it is clear that he did not sympathise with the mutineers. Gurdon writes:

‘My dearest Anne, I am sorry to tell you notwithstanding the arrival of the Lords of the Admiralty & the pardon sent them yesterday, nothing whatever is done, they only made new propositions of a totally inadmissible nature.  The Lords still are here, & what is meant to be done…it is a most melancholy business & shows the total want of principle in these rascals…’ 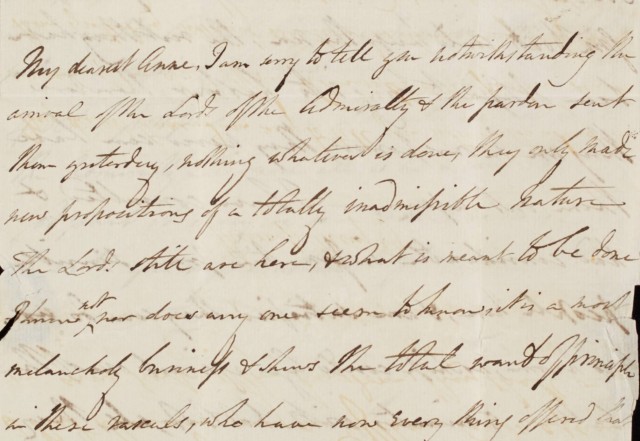 When some demands took a political tone, including requests for Parliament to be dissolved, this frightened the British authorities who were already fighting a war with revolutionary France.  It also spooked some of the sailors and several ships pulled up their anchors and escaped the mutiny.  HMS Director was one of the last ships to surrender when the mutiny collapsed and the ringleaders were hanged.

In early October 1797, the North Sea Fleet was ordered to Great Yarmouth to resupply but news soon reached them that Dutch ships had broken out of harbour and the British were ordered to intercept them.  On 11 October 1797, HMS Director, along with other ships in the Fleet, took part in the battle of Camperdown.  It was one of the most significant encounters between British and Dutch ships during the French Revolutionary Wars.  This time, the British were victorious and captured eleven Dutch vessels.

You can look back through our previous blogs for more tales from marriage licence bonds.