Disaster on The Grand Tour

During the seventeenth century the grand tour became a popular pastime for aristocrats, wanting to complete their education and to see the fine examples of art and different culture in Europe. We know of their travels through the art work, and antiques they collected, and the letters and diaries they write.

The tour itself usually lasted one or two years, and incorporated a trip to Paris and a tour of the principal Italian cities, such as Rome, Venice, Florence and Naples.

By the eighteenth century transportation in Europe was well developed. There were several ways for tourists to get hold of carriages.

The Norfolk Record Office has a number of documents written by eighteenth century tourists.

In 1792 Anne Gunn travelled from Irstead to Rome with her husband, Revd William Gunn. In her journal she recounts her experiences of travelling by Post along the coast road from Marseilles.

‘We had still the same mountainous country and the road very bad indeed, and the Frejus horses very unequal to the journey. We were to have crossed l’Estorelle and slept at Cannes but the Postilion was unacquainted with the road or he would never have attempted it. Night came on it rained very fast and we were stuck upon the mountains where I would have willingly stayed till the morning. We had soon occasion to wish that we had determination to do so for in ten minutes we were overturned, but thank god none of us hurt worth mentioning. The coach laid partly over the edge of the road, a very little more and we should have been down to the bottom of the precipice or if we had been going faster it very likely would. I shall never forget what I felt like at the time nor how surprised when it stopped. I believe now that the man was asleep for there was great stone 1 yard high laid in the road which were very plain to see. We got out as well as we could, thankful that we were none of us hurt, but then what was to be done, there was no horsemen and the coach could not be got up without assistance nor did they not like to leave it alone. So we sent the coachman to the Post which was 2 or 3 miles off and the rain drove us into the coach again, much against my inclination, and never shall I forget in what a dreadful manner the time just before anyone arrived for I felt every minute as if it was going to roll down the precipice. In less than 2 hours he returned, to my great relief with 9 men, and with some difficulty they raised the coach, which had sustained no injury and we all set off on foot as I was determined to ride no more, but we came onto level ground at last I was quiet done for and glad though afraid to get in to it again’. 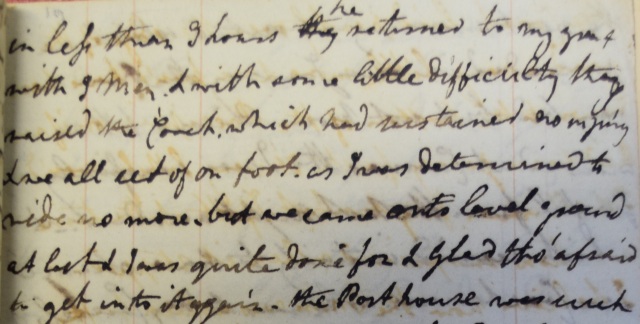 Anne’s experiences show how traumatic travel can be.

This entry was posted in Snapshots from the Archive and tagged italy, journal, learning, travel. Bookmark the permalink.