Posted on January 19, 2017 by notesfrompoppy

Located within the notable collection of the Turner, Palgrave and Barker Families, these pamphlets, written in French and English, hold valuable information about the early plant and geographical study of J D Hooker. They concern ‘Dr Hooker’s Botanical mission to India’ and preparatios for the expedition through correspondence with Baron Humboldt¹.’

So why is this of interest to us in Norfolk?  Sir William Jackson Hooker was born in Norwich and he married Maria (nee Turner). They moved to Halesworth where their son (Joseph Dalton Hooker) was born on 30 June 1817. We owe a significant amount of our botanical knowledge to the eminent Hooker family.

Joseph Dalton Hooker had collected plants from an early age following his father’s interest in Botany (William Hooker was the first official director of Kew Gardens, 1841).

He had gained credibility as a surgeon and botanist on the HMS Erebus expedition 1839-43 to the Antarctic, Tasmania, New Zealand and South America under the command of James Clark Ross and was therefore the right candidate to be selected for this plant hunting trip to India, to a region called Sikkim between Nepal and Bhutan in the Himalayas.

The pamphlets suggest a good friendship between Hooker and Humboldt and the older friend gives useful advice in order to collect accurate data:

“record the height at which plant families cease, any fish in lakes at height and what species, the soil temperature using probes into the ground at different heights”.

This correspondence between the adventurous young traveller and Humboldt would have been invaluable.

We can only imagine Hooker’s journey to the Himalayas- leaving England on 12 January 1848, he had a passage on HMS Sidon to the Nile, then he travelled overland to Suez where he boarded a ship to India. He arrived in Calcutta (Kolkata) on 12 June 1848. Travel was then by elephant to Mirzapur, up the Ganges by boat to Siliguri and finally overland by pony to Darjeeling where he arrived on 16 April 1848. All of this was completed with his instruments, scientific tools, plant drying and collecting paraphernalia!

The Botanical trip lasted 3 years and during this time Joseph collected about 7,000 species that included Rhododendrons, Balsams, Orchids, ferns and mosses from India and Nepal. Images and drawings of the specimens collected can be seen here.

Images above reproduced with kind permission of the Director and Board of Trustees, Royal Botanic Gardens, Kew

The most significant result of his travel was an attempt to explain the geographical distribution of plants.

If you wish to discover more about this remarkable man (in June 2017 it will be 200 years after his birth), the following links to the Kew archive describe the conditions of Hooker’s journey and reproduce a lecture given by Michael Palin to the Anthenaeum club, of which Hooker was a member for 60 years:

An insight into the standards of a botanical artist 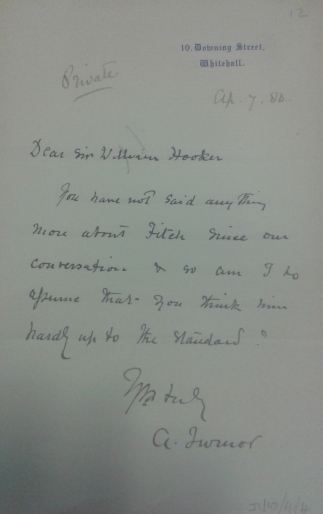 The Turner, Palgrave and Barker Family papers also contain two letters concerning Walter Hood Fitch, William Hooker’s appointed botanical artist. Fitch was paid directly by Hooker and he was the sole artist for all the publications issued by Kew. He was a prolific illustrator and drew some 10,000 drawings for publication.

The letters suggest discussion about Mr Fitch’s worth. A letter addressed to Sir William Hooker from A Turnor in 1880, states that Mr Fitch is “hardly up to standard”, but a draft response from William’s son Joseph rebuffs this statement suggesting that in his early career he produced some excellent work “the finest of which Her Majesty must recollect are in the Royal Libraries both at Windsor and Osborne”

It is known that the income of the botanical artist would not have been grand and often they suffered with failing eyesight in later years. The Hooker family would have wanted to support their friend in retirement and it may be that these letters are appealing to the government for recognition of the notable works done by Fitch for Queen and country.

¹Alexander von.Humboldt (a Prussian geographer, naturalist, explorer and scientist (14.9.1769 – 6.5.1859) was generous towards his friends and mentored young scientists.