‘What a cracker’ photograph taken for the Rowntree Mackintosh News, October 1981. The image shows the biggest ever cracker made by Tom Smith & Company in their Norwich premises on Salhouse Road. It was made as a special fund raising prize for the Confectioners Benevolent Fund and measured over 12 ft. long and 2 ft. in diameter. The cracker contained 250 toys, party hats and mottoes. NRO catalogue number BR 266/426

Crackers are an English invention derived from a French idea. They were first made by Londoner Tom Smith, an apprentice confectioner specialising in the making of sweets and cake ornaments. When he had saved enough money, Smith set up his own business and became a prosperous confectioner. On occasions he would travel with his wife to France to search for new ideas which might attract greater custom to his shop. In 1847, in a Parisian shop, he saw sugared almonds wrapped in twists of paper which were known as bon-bons. Smith liked this idea and on his return to England adapted it by wrapping sweets in a variety of brightly coloured tissue; an instant success at Christmas.

Over the following years Smith sought new ways to reach a wider audience. He wrapped up printed kiss mottoes with the sweets and added tiny toys, charms and inexpensive trinkets to his bonbons. However, it was in 1858 that his log fire finally sparked the inspiration for what was to become the first Christmas Cracker. It is here that story turns into legend as how Tom Smith gained the idea for crackers has been told in many ways. A publication from the Townswoman, London, December 1982 mentions Smith half-dozing before the fire when a loud crackling and popping of one of the logs in his grate jerked him out of his drowsiness. He awoke and cried ‘bangs for bonbons’. In another record, an extract from the Rowntree Mackintosh News published in 1976, it is said the shape of the logs in addition to their crackle provided Smith with the inspiration.

‘It is said that one Christmas he was thinking about the subject as he watched logs burning in his fireplace. He prompted them to burn more brightly by moving them with his foot, and immediately there was a spurt of flame followed by a crackle. “Why not,” he mused, “roll paper into the shape of a log and introduce a means to make it crackle?”’

Whichever tale holds more truth, it is certain that that evening paved the way for two years of experimentation while Smith searched for something that could be wrapped with the sweets and explode with a noisy but harmless bang. This was eventually achieved and at Christmas 1860, the first crackers were launched and sold under the name ‘Bangs of Expectation’ later referred to by Smith as Cosaques.

The ‘Bangs of Expectation’ were loved so much that the following year Smith had to purchase a larger building to manufacture them in. Tom Smith’s crackers were soon being sold throughout the year, with a little present in place of the original sweets. When Tom Smith died in 1868, his two sons inherited the business and continued to develop the designs, contents and mottoes of the cracker. Walter Smith, the youngest son, substituted the love verses for a topical note and added paper hats, many of which were elaborate and made of best tissue and decorative paper. Both the crackers and the boxes they were packaged in became increasingly ornamental and elaborate, and other firms including A.J. Caley & Son Ltd of Norwich began to manufacture crackers too. 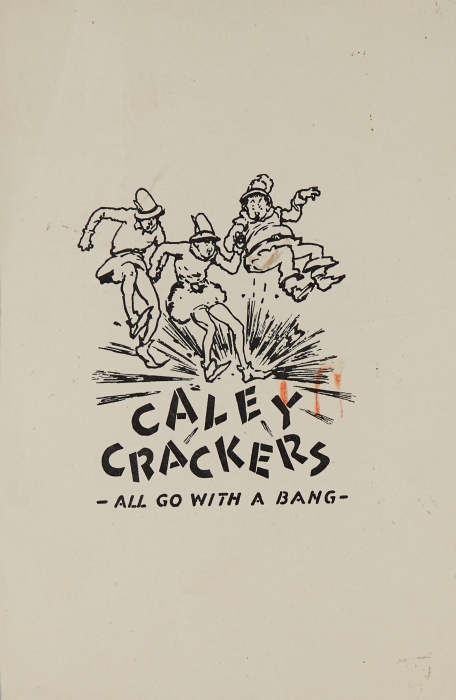 Crackers first became part of A.J. Caley & Son Ltd’s product line in 1898 on the agreement of directors Edward and Federick, the son and nephew of the original founder and chemist Alfred Jarman Caley. A.J. Caley & Son Ltd operated from a factory at Chapel Field where they also produced mineral water, chocolate and ice-cream. Although not as large in output as Tom Smith’s, Caley’s crackers were known internationally and supplied worldwide to France, Africa, Egypt, Australia, Canada, India, China, Japan and Iceland. By 1904, the company was employing 700 staff.

A.J. Caley & Son continued to be run by the Caley family until Edward and Federick retired in 1918. At this point the business was sold to the African and Eastern Trading Corporation and 14 years later was sold again, this time to toffee manufacturer John Mackintosh & Sons Ltd. of Halifax. Despite the changes in ownership the crackers continued to be traded under the Caley name until Mackintosh decided to merge with Tom Smith & Company in 1953.  It was agreed the new joint company would operate under the name of Tom Smith’s and continue to be based in Norwich in a new factory at Salhouse Road.

By the 1980s, Tom Smith’s employed more than 400 staff, including outworkers, in Norwich. The company produced about 50 million individual crackers a year. While many of the more expensive crackers and table decorations were still made by hand the company also owned two automatic cracker-making machines. The crackers were not just made for Christmas either. Prince Charles and Diana, Princess of Wales, had Norwich made his’n’hers crackers at their wedding breakfast, with the Royal Family enjoying Norwich-made crackers for many years. 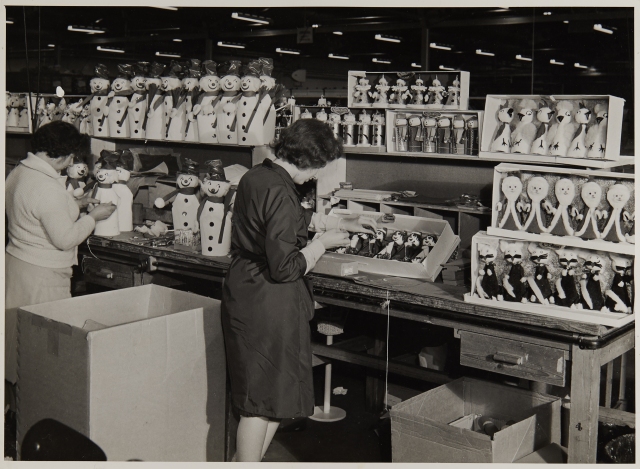 At the Norfolk Record Office we hold the records of Nestlé (UK) plc’s Chapelfield Factory, Norwich and of Nestlé’s predecessors, A.J. Caley & Son Ltd, John Mackintosh and Sons Ltd (Caley branch) and Rowntree Mackintosh Ltd. Included in these records are a variety of photographs taken for publicity purposes (both of the crackers being made and the final product) as well as articles relating to Tom Smith’s crackers, advertising and publicity material. The records reflect the variety of designs produced by Caley’s as well as showing other Christmas novelties produced by the company such as party poppers and figures of Father Christmas or snowmen standing over 2ft. tall. The figures contained a selection of numbered toys which corresponded to slips of paper and were known as lucky draw items.

In the early days of Caley’s cracker production many box designs featured graphics designed by a young Alfred J. Munnings. Munnings was an East Anglian artist (1878-1959) who worked as an apprentice at the Norwich printers Page Bros from 1891-1892. Designs he created for Caley’s included “Queen of Hearts,” “Jack and the Giant Killer,” and Caley’s “Christmas Pudding.” At an early stage Munnings’ work caught the attention of one of Caley’s directors Mr John Shaw Hopkins. Hopkins became a regular patron of Munnings’ work and took him on many trips to the continent.

At the Norfolk Record Office we hold display photos of some of Caley’s and Tom Smith’s crackers. These are a reflection of the interests of the time, with characters from the Jungle Book, the Muppets, Thunderbirds and Batman all featuring on cracker designs.

Giant hand-made crackers were also popular with the public, with 2ft., 2ft. 6in., and 3 ft. crackers available to purchase, filled with a variety of gifts. These were often bought by organisations as prizes or used by stores as a centre-piece of a Christmas display. Other hand-made lines included luxury, more ornate crackers, the “Rolls-Royces” of the industry. These often included jewellery as gifts.

The production of crackers began each November for the Christmas of the following year and once completed the boxes of crackers were stored in warehouses until the spring. From March the crackers were moved out to different storage depots around the country and their journey to the shops would begin each summer. 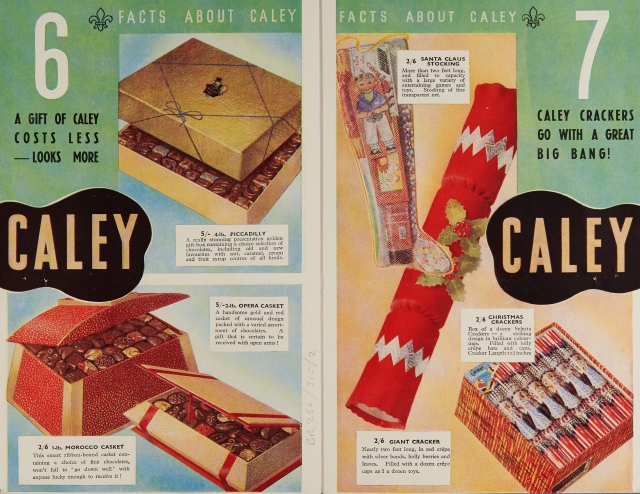 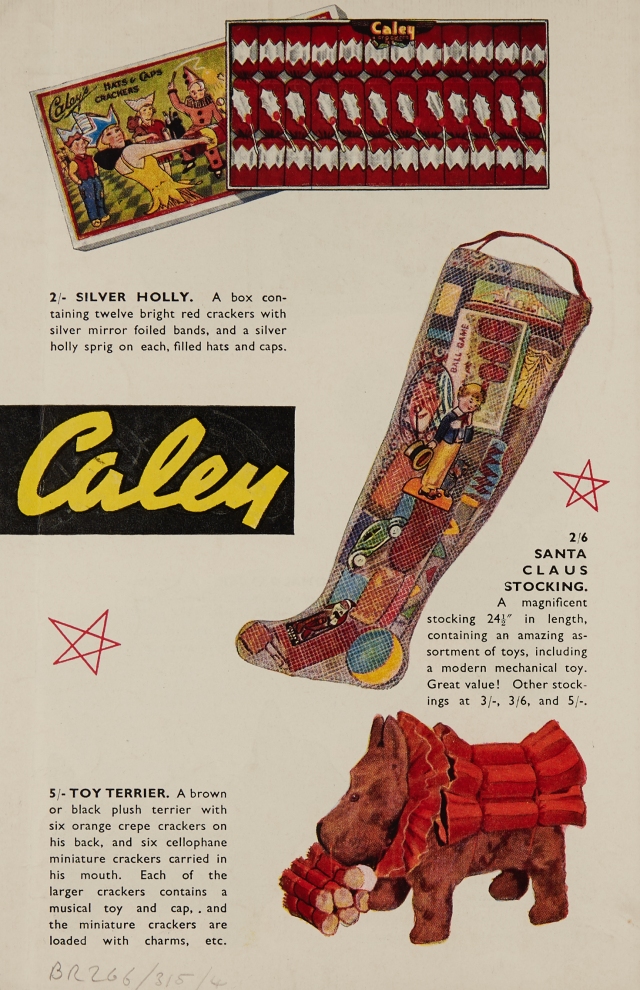 Tom Smith’s continued to operate in Norwich until 1996 when they were taken over by Guinness Mahon & Co. Finally in 1998, exactly a century after the first crackers were produced in Norwich at Caley’s, the last Norwich made crackers came off the Tom Smith production line.

If you are interested in learning more about Caley’s Crackers or confectionary why not pop into the Norfolk Record Office at The Archive Centre yourself. Here you can view any of the Caley’s business records which are more than 30 years old. In addition to promotional material related to Caley’s Christmas Crackers we also hold information about their Christmas confectionary ranges such as the 1980 Rowntree-Mackintosh selection packs shown below.