From parchment to pixels

From assistant manuscript repairer to conservationist and archive conservator Antoinette Curtis has seen many changes since she first began working at The Norfolk Record Office in 1973. A familiar face in the conservation team, Antoinette has informed and inspired students, staff and visitors for over 31 years. Before she retires on the 22nd December we decided to ask Antoinette about some of her most memorable moments.

Antoinette first started to work for the Norfolk Record Office in 1973, when it was in the central library on Bethel Street. In her first year she was sponsored by Norfolk County Council to undertake the Society of Archivist’s Conservation Training Scheme, a three year course which she completed in 1976. 30 years later Antoinette qualified as an instructor for this course, as a parchment specialist, and began training other conservators. 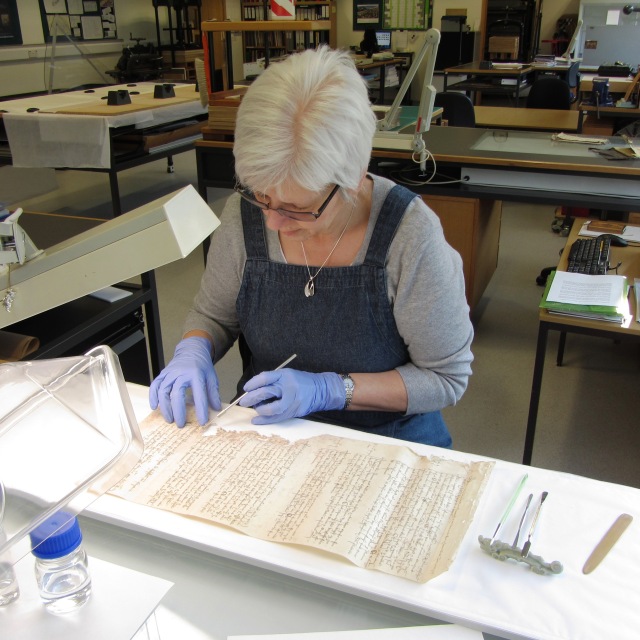 Antoinette’s most interesting records to conserve

One set of records which have stayed with Antoinette are the photographic records of prisoners from Her Majesty’s Prison/Young Offenders’ Institution Norwich held at the NRO. During the consolidation process for this project she got to know the photographs dating from 1907-1935, and the people captured in them, very carefully. ‘I was shocked by the dresses the women wore and by how young some of them were.’

A similarly moving experience was encountering the images held on Frank E Delf’s lantern slides, a collection which Antoinette has just finished cleaning and repackaging with fellow conservator Yuki Russell. Whilst cleaning and preservation packaging the Delf slides Antoinette and Yuki discovered an image of a violet seller; a young man smoking a pipe with a tray of violets for sale. Antoinette expressed her interest at seeing these early images, dating from around 1890, describing the process as ‘like going on a tour of Norfolk’. Mr Delf who formed the collection was a marine engineer, artist and naturalist and the collection gives an interesting insight into Norfolk in the early 20th century. Within the collection are many images of windmills including the gear held within them, records of wherries and portraits of Great Yarmouth fishermen amongst others. 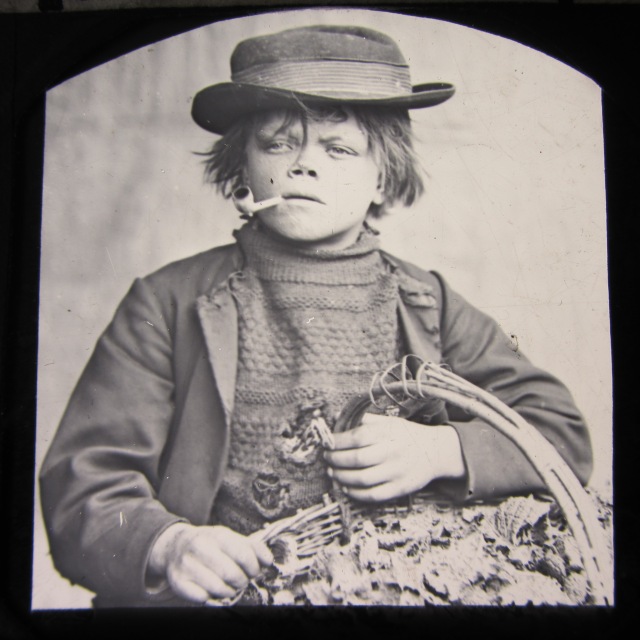 It is perhaps fitting that the earliest slides were deposited the year Antoinette started at the Record Office and their preservation has been completed in the year that she leaves. To coincide with the preservation of the Delf slides we will be running an evening event ‘The Magic of the Lantern Slide‘ at Norfolk Record Office: The Archive Centre on Thursday 26th May 2016, starting at 5.15pm.

Antoinette acknowledges that there is now much more of a scientific awareness of the properties of materials and this in turn has led to new conservation processes and the ability to repair documents that wasn’t possible before. Antoinette explained when conservation first started everyone thought items would be heavily used, archival conservation came primarily from a book binding background and items were over-protected to withstand heavy handling. Now interventions are minimal and more scientific in approach, there is more of a respect for the format of the material and how it has been used. Digitisation has also created another means of accessing material.  Whilst widening access to records these changes have also brought new challenges for conservators who need to demonstrate an understanding and knowledge of the material as well as showing the ability to craft the material itself.

Two of the records held at the NRO which have benefitted from a new understanding of conservation techniques and materials are the Salthouse Register and the Aylsham Lancaster Manor Court Roll.

The fire in Norwich Central Library in 1994 left conservators with a huge challenge as around 10% of the NRO collection was water-damaged. New equipment was needed to meet the needs of the documents and new techniques to respond to the damage had to be developed. However as a result of this in 2005 the conservation team were able to make accessible the earliest Salthouse Parish register, which had previously been unfit for production.

During the Second World War the Rector and Churchwarden of Salthouse buried the register to protect it from enemy action, but when it was unearthed again the records were so badly damaged by damp the information inside it was totally inaccessible with many of the pages fused together. Through the use of a humidification dome and low suction table Antoinette was able to develop new ways of treating water damaged parchment. The pages were separated, flattened and encapsulated and small repairs made using a remoistenable tissue.

The project, which attracted high media attention, was sponsored by the local community who Antoinette remembers visiting the studio to see the conservation in progress. More information about this project can be found in the Norfolk Record Office Exhibition Guide ‘The Salthouse Parish Register, 1538-1713’.

2012 saw another large conservation challenge of a very different manner-The Aylsham Lancaster Manor Court Roll, 1509-46. The roll, which consists of 131 parchment routlets, was in very poor condition due to poor storage conditions prior to the roll being deposited at the NRO. The document is one of a long series of records from the court of the manor which extend from 1446 to 1846, and prior to the conservation project was the only record of the court unavailable through condition. This denied researchers access to information about Aylsham during the whole of Henry VIII’s reign. The aim of the conservation project was to repair the parchment roll and to allow for future digitisation, widening access to the document.

The challenge for the conservation team was to think of a whole new system for coping with such dehydrated parchment; most of the routlets had suffered such dehydration the parchment had become porous and large parts of the text and writing surface were lost. Through funding from the local community in Aylsham, the National Manuscripts Conservation Trust and Norfolk Record Office, Antoinette was able to trial and explore new adhesives to repair the parchment which had text written on both sides. 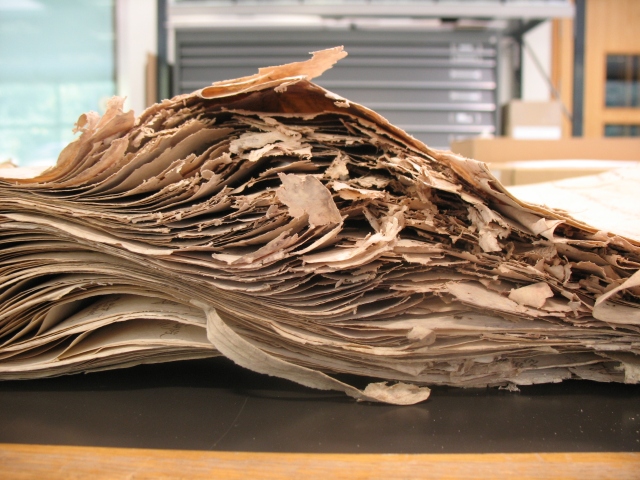 Antoinette happily spoke about her proudest moment at the NRO: the opportunity to travel to Canada in 2011 for a Symposium on adhesives and consolidants for the CCI (Candanian Conservation Institute) in Ottawa. Yuki and Antoinette had initially sent in a poster for the symposium which was liked so much they were asked to go to Canada to provide a presentation about the techniques used. Luckily through an international bursary from the Archives and Records Association and match funding from The Clothworkers’ Foundation they were able to do so. 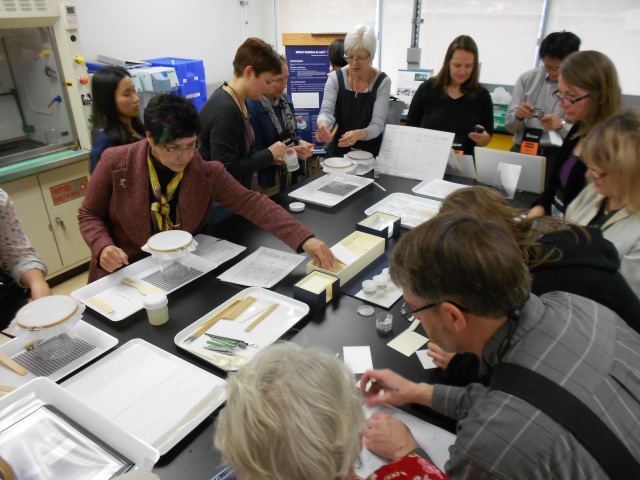 The projects mentioned above are only a few of a large number Antoinette has been involved in at the Norfolk Record Office over the past 30 years. Those who read our blog last December may remember Ed from the John Innes Centre, who undertook a 12 week internship with Antoinette studying the difference between isinglass derived from wild-caught and aqua farmed sturgeon. This study has now been published in the latest edition of the Icon Journal of Conservation.

Another volunteer Rachel Greenwood went on to study for a masters in paper conservation from University of the Arts, London at Camberwell. Rachel wrote her dissertation on a collection of 18th century pattern books that were being held at the NRO on behalf of Norfolk Museums Service. Rachel worked in the conservation studio to carry out all practical work and gain an understanding into the access, preservation and housing needs of the collection.

If you are interested in learning more about how scientists and conservators are working together, you may be interested in BioArCh a collaborative research facility at the University of York who are using erasings to analyse parchment and determine which animal it comes from. This non-evasive process allows the team to work out the DNA of the animal, providing information for animal breeding and allowing us to study how animals have changed.

The Norfolk Record Office have also collaborated with Queen Mary University of London and Cardiff University on the Apocalypto project. Through using high contrast X-ray microtomography the Apocalypto project was able to ‘virtually’ unscroll one of the Bressingham Scrolls which had been so badly water damaged before it was deposited at the NRO that unrolling it would cause the parchment to disintegrate.

The conservation studio always fascinates visitors to the Norfolk Record Office and we hope this blog post has given you an insight into the range of skills held by Antoinette and our conservation team.

We will endeavour to pass on to Antoinette all messages recieved by 10am on Monday 21st December.

2 Responses to From parchment to pixels