Moved for Repairs or Used for a Rockery: The real story behind why the font of St. Mary’s Burnham Deepdale spent 40 years in a garden miles away

Posted on September 5, 2020 by cbolsterNRO

This is an attempt to tell the true story of the font and its stay in the garden of the Rectory at Fincham from 1807 to 1842. As recently as 2015 a search online brought up the following story:

‘The Norman font once stood in the north aisle but in 1797 it was broken when being moved and was taken to Fincham Rectory to be repaired. However, it stayed in the garden there for 40 years before it was finally restored to its present position’.

So, what is the real story behind how this font ended up 30 miles from home?

In 1790 Rev Samuel Pegge, a Fellow of the Society of Antiquaries, wrote a letter to the Hon Daines Barrington a noted antiquary and naturalist who was one of Gilbert White’s correspondents. It was called ‘Observations on an ancient font at Burnham Deepdale in Norfolk’. At the time the Rector was Henry Crowe who held this position from 1766 to 1816. There was no Rectory at Burnham Deepdale so he lived at Burnham Westgate. He was also Rector of Wolfterton from 1768 to 1816 and would have had a considerable income from all sources.

In the 1790s a lot of work was carried out on the church which was apparently not on a good state. The north aisle was taken down and the font had to be moved. Rev Pegge, talks about ‘a most curious and singular ancient laver, appearing in the parish church of Burnham Deepdale’. What he says next is I think central to how this font ended up in the garden of Fincham Rectory.

‘The embellishments on three sides of this font,(the fourth side being placed against a pillar never had any decoration, but only a foliage resembling that on the other sides) were till lately totally encrusted by frequent whitewashings, and consequently obliterated, but fortunately a small portion of the coat or incrustation breaking off by some means, the present worthy and sagacious Rector of Burnham, the Rev. Henry Crowe instantly perceived that certain effigies in relief were carved on its sides, and being a gentleman of inquisitive disposition, very laudably gave himself the trouble of denuding and excoriating the whole; so that it is entirely owing to his attention and care, that this truly venerable monument, for such I conceive you will undoubtedly esteem it, has now regained its pristine state and appearance’.

In 1789 Henry Crowe’s son, Henry, did a drawing of the font, engraved by James Basire which Pegge attached to his Observations.

Thus before 1790 the font was revealed in all its glory. It is popularly called ‘The Labours of the Months’ font. Three sides have four compartments each showing a labour of a man in the month, for example August has a man binding a sheaf of corn, September has a man threshing corn. When the true subject of the carvings was revealed there may have been disquiet among parishioners and churchwardens. Whilst not a truly pagan subject matter it certainly had no overtly Christian message. Rev Crowe, busy with his Holkham duties, not living in Burnham Deepdale and probably having a curate there, and being Rector since 1766, may not have had his heart very much in the details of this church. At some point the parishioners wanted the old font out and a new one put in.

Much is made in modern commentaries of the old font, having been broken in removal when the north aisle was demolished, being taken to Fincham for repair. The thought of anyone transporting this huge block of Caen stone forty miles or so along Georgian roads for repair seems unlikely to say the least. It would have been an insult to local stone masons, who surely would have had equal skills to any in Fincham and would have risked further damage.

The Rev Crowe would have recognised the great antiquity of the font. In accounts there are varying opinions on its age, with debate over whether it is Saxon or Norman. He was faced with a difficult situation. He had no house of his own to move it to and it could not be left in the church or its environs. This is where Rev Robert Forby enters the narrative.

Henry Crowe and Robert Forby were related. Henry’s daughter Katherine Crowe married Henry Helsham, a cousin of Forby. Robert was the author of The Vocabulary of East Anglia. When his eyesight began to fail he turned to another interest, architectural antiquities. When William Miller was publishing a new edition of Blomefield’s History of Norfolk in around 1807 he asked Forby to provide an additional volume to supplement Blomefield’s apparent lack of interest in, and knowledge of, architectural antiquities.

In correspondence between Forby and Rev Crowe, Forby writes ‘our remains of ancient art are yearly dwindling away, by stupid disregard, by perverse innovation, by wanton mischief, and even by dishonest depredation.’

So when news reached him of the font at Burnham Deepdale being discarded it is easy to imagine that he and Henry Crowe agreed on preventing it from destruction or neglect. It was brought to Fincham and far from ending up in a rockery was placed in the garden in a chosen spot.

There is evidence of the font being placed carefully in the garden in Fincham in the form of a 1839 watercolour by Miles Edmund Cotman, son of the celebrated John Sell Cotman.

Clearly the font has been broken in at least one place but it has been placed with care on a base of slabs and is not covered with any plant life.

Dr Frank Sayers 1763-1817, poet, metaphysical writer and antiquarian wrote in his Disquisitions 1808, ‘this venerable relic was judiciously entrusted to my highly esteemed friend, the Rev.R.Forby of Fincham. That gentleman who well knows how to appreciate the ‘res antiquae laudis et artis’ has carefully preserved it in his garden, and has graced it with the following inscription-

Nor be polluted by some baser use,

This font, a work of Anglo-Saxon art,

Thrown down from its proper place,

By the busy lovers of novelty,

It retains at least this much of its original privilege,

That it receives only the waters of heaven.

The font stayed in Fincham until 1842. Presumably by that time the ‘busy lovers of novelty’ were gone or very old. The Rector of Burnham Deepdale in 1842 was the Rev Edward Blyth. His brother William Blyth became Rector of Fincham in 1846 and much of our knowledge and references about the font comes from his History of Fincham published in 1863. He writes ‘In the year 1842, the Rector of Deepdale, my late lamented brother, with the zealous aid of his Churchwardens, succeeded in recovering their font, after an abstraction and detention at Fincham for 35 years’

The font suffered damage during its removal and restoration. In 1875 the then Rector, the Rev E.K.Kerslake, discovered that the Font was not altogether original but had been repaired. He says ‘We found a fragment among some stones removed from the south doorway… which proved to be the lower corner between August and September, with September’s legs in it.’ He thought the restorer had just about got the legs right but not so the sheaf in August and some of October. This explains the discrepancies between Henry Crowe’s drawing and what we see today. However, most of the font got back to Deepdale unscathed. 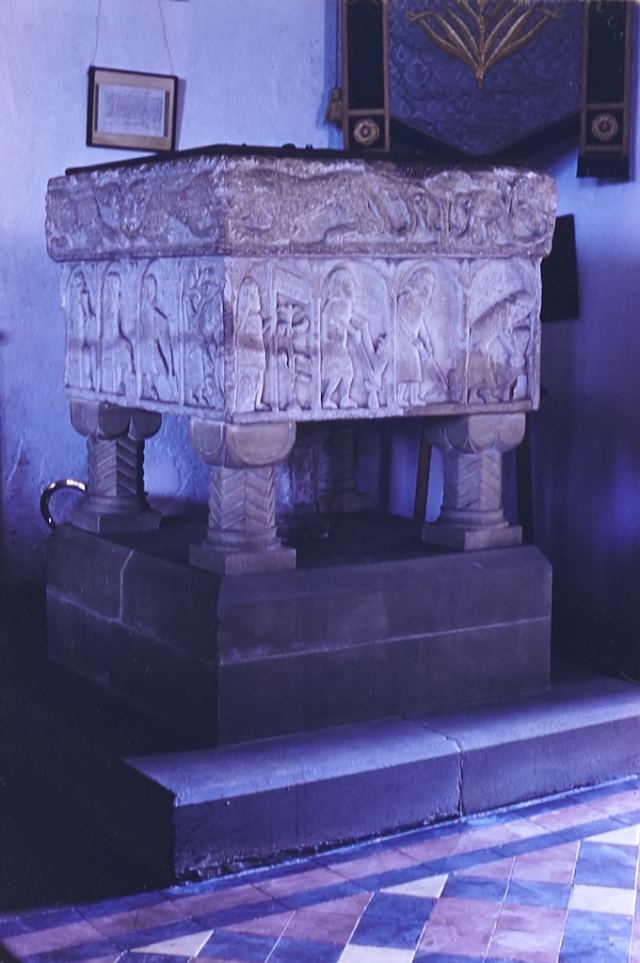 Rev William Blyth, Historical Notices and Records of Fincham in the County of Norfolk, 1863

Handwritten notes about the 1875 restoration

Rev. Charles Parkin, A Topographical History of the County of Norfolk, 1807 edition

Researched and written by Stewart Waterston

4 Responses to Moved for Repairs or Used for a Rockery: The real story behind why the font of St. Mary’s Burnham Deepdale spent 40 years in a garden miles away