Norfolk: A County of Welcome

Who was Lewis Ecker? Why did he have to leave his homeland of Russia in the 19th century?

And what happened to him and his family on arrival in Norfolk? In this blog post we use a number of documents find out more about Lewis and his journey to become a very successful tailor in Norwich.

Founded in 1998 Refugee Week is a UK-wide festival celebrating the contributions, creativity and resilience of refugees. Using art, culture and education, Refugee Week helps communities to connect and learn from each other promoting a culture of welcome.

The Norfolk Record Office education and outreach team visit schools across the county to present workshops on different themes.  One of our most popular school workshops is our Norfolk: A County of Welcome workshop.  We begin with finding out facts about refugees who have found a new home in Norfolk. These facts are used to inform a timeline covering 500 years of refugees settling in Norfolk and their legacy.

We then look at a story of Lewis Ecker and his family who journey from a land of persecution and pogrom across Europe to find their home in Norwich.

For many years the Jewish community in Russia (for the purposes of this blog when we say Russia we refer to the Russian Empire) was persecuted and attempts were made to expel or convert them to Christianity.

In May 1882 the Government introduced the May Laws, these said:-

Additional laws were brought in, in the following years, including: –

To give an idea of how large the area was that the Jewish people could live in. We can see on the map the size of the Russian Empire at the time in red. The pale of settlement is shown in green. In 1897 nearly 5 million Jews lived there, which was 94% of the total Jewish population of Russia.

The incessant anti-Jewish decrees and waves of pogrom resulted in a constant stream of Jewish refugees from the Pale of Settlement to Western Europe and beyond. Between 1881 and 1920, over two million Jews left the Russian Empire.

The journey took them from Brody, one of the principle towns that Jewish refugees fled through, to Hamburg which is 812 miles, approximately the distance from Lands End to John O’Groats in the UK. People moved by train, river, but most walked, carrying as many possessions as they could.

Then from Hamburg they journeyed to London then on to other parts of the UK or on to USA, Canada.

One of those who fled was Lewis Ecker.

We find information about Lewis Ecker dotted throughout the archives and we can piece together his story.  We know he was born about 1867 in Poland, which at that time was part of the Russian Empire.

He left sometime between 1881 and 1889, and arrived in Norwich with his wife Leah, mother Esther and his brothers Emmanuel and Hyman.  We know he spent some time in London where he met Leah Sandler who he married in the Norwich Synagogue in December 1889.  For images see Picture Norfolk 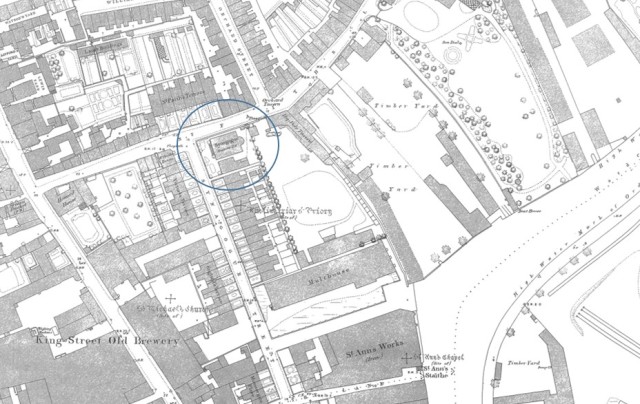 First Edition OS map 1885 showing the location of the Synagogue in Norwich. This was destroyed by enemy action during the Second World War.

In the 1891 census, we find Lewis, a tailor, and his family living on Silver Street in Norwich, with his wife Leah, baby Sarah. Also boarding with the family is Moses Marganstein from Hungary, also a tailor.

The next time we see Lewis is in his Naturalization papers for November 1896. 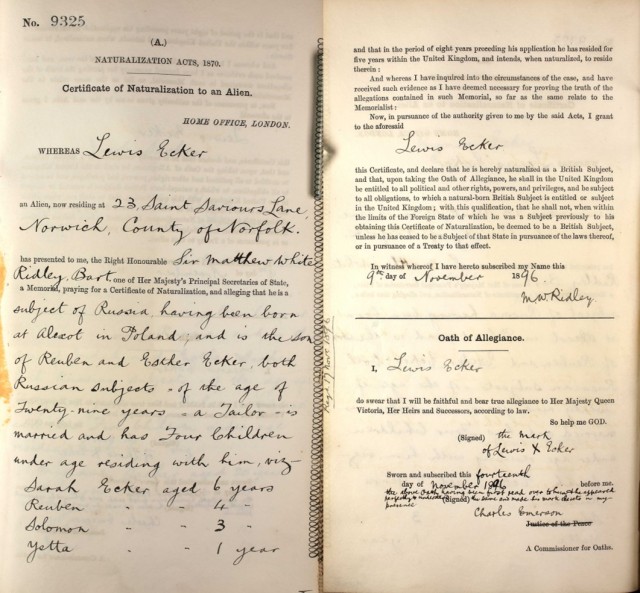 With citizenship came the right to vote, hold civil or military office, and the ability to inherit land, Naturalisation Certificates typically list the name of the immigrant, residence, birthplace, age, parents’ names, occupation, and the names of any children.

The document tells us that Lewis was living at 23 Saint Saviours Lane, Norwich.  The property is no longer there, destroyed in the redevelopment of the area during the late 1960s -early 1970s.

We find out he was born in Alexot in Poland, and that his parents were Reuben as Esther Ecker, he was 29 years old and a tailor, he was married and had 4 children; Sarah aged 6 years old, Reuben aged 4, Solomon aged 3 and Yetta aged 1 year old.

Lewis had to declare that he has resided in the UK for 5 of the last 8 years.  The document is dated 9 November 1896, Lewis swears to be faithful and bear true allegiance to Queen Victoria.  Lewis is unable to sign his name, so he makes his mark.

We next see Lewis in the 1900 White’s Trade Directory for Norfolk, which shows that Lewis and his brother Emanuel Ecker had an outfitters (tailors) at 9 St Benedict’s Street in Norwich,

In 1911 the census shows that the family were still living and working at 9 St Benedict’s Street. Two more children had arrived; Maurice and Eva, and Emanuel is no longer living in the property.  Lewis is now described as a Merchant Tailors and Sarah, Solomon and Yetta have gone into the family business.  The 1911 Census is the first time we see the handwriting of the householder and here we see that Lewis has signed his name, a few short years before he made a mark on his naturalization papers.

This census provides additional information concerning the children, we find that of the 9 children born to Lewis and Leah born 1 had died. Reuben and Miriam are not listed at this address, at this date.

To find out what happened next, we can look to the 1939 Register, a snap shot of the population at the beginning of the Second World War.  Here we find that Lewis and Leah were still at 9 St Benedict’s Street, he is a Master Tailor and his son Solomon is in the family business too.

Hyman who left Russia at the same time as Lewis, was living at 71 St George’s Street, also a tailor he is married Rebecca  and living at home at this time are children Rosetta (Hollerith Operator – an early calculation machine), Ronald (tailor) and Stanley (driving instructor)

Edward (son of Lewis) and his wife Lillian have a tailor shop on 57 Prince of Wales Road.

Reuben (son of Lewis) is living at 4 Staverton Road in Willesdon, Middlesex, he is described as a Civil Servant and his wife Bessie as a School Teacher.

Lewis Ecker was just one of many who have escaped persecution in their place of birth and found a new home in Norfolk, we can discover their stories and how they have enriched our county’s history.

The theme for Refugee Week 2020 is ‘Imagine’.  In the era of Covid-19, the call to imagine feels more important than ever. We can try to imagine what it must be like to have to leave your family behind, or what your hometown might look like to someone walking its streets for the first time.

At the end of our Norfolk: A County of Welcome workshop that we teach to primary schools in the county, we ask the children to imagine that they are refugees fleeing their country, they need to pack their suitcase to start their journey.  We give groups of up to six children a crate with eleven items (religious book, photo album, passport, money, portable valuables, water, food, blanket, clothes, toy and sewing machine), we then ask them to select seven items to pack into an actual suitcase to take on their journey.  There is no right or wrong answer, the idea is to promote discussion and empathy and arrive at a conclusion together.

Look around your home now…..what would you pack in your suitcase?

For Refugee Week 2020 we are invited to do one or more of eight simple acts we can do to stand with refugees and make new connections in our communities.

For more information about our workshops please visit here

If you would like to book a workshop with the Norfolk Record Office Education and Outreach team please email norfrec@norfolk.gov.uk

This entry was posted in Snapshots from the Archive and tagged family history, learning, local history, Refugee Week, school. Bookmark the permalink.

2 Responses to Norfolk: A County of Welcome