THE FIRST ARMISTICE DAY IN NORFOLK AND PEACE DAY 1919

The ‘end’ of the First World War left an aftermath of political, social and emotional turmoil. Although many men and women were still serving abroad, it was decided that peace would be celebrated while the tragedy of war would be commemorated.
Communities come together at such times and it is the parish records, school records and local newspapers that record such events. Records from the Norfolk Record Office, Picture Norfolk and Norfolk Heritage Centre give a picture of how peace was marked in 1919.

“Now the war was to all intents over and peace had been declared, we all thought we could let ourselves go”. (A peace celebration meeting at Briston. The Norfolk Chronicle and Norfolk Gazetteer 11 July 1919).

The nation celebrated with a dedicated Peace Day on Saturday 19 July 1919. A thanksgiving day was held the previous Sunday. “In all the churches of Norwich on Sunday there were sermons and special features appropriate to the appointed day of thanksgiving for the Peace”. (The Norfolk Chronicle and Norfolk Gazetteer 11 July 1919).

In Norwich demobbed men were invited to take part in a procession but not everyone supported this. On 12 July 1919 the Norwich Mercury reported that The Norwich Branch of the National Federation of Discharged and Demobilised Soldiers and Sailors had declined to take part. “The celebration of this mock peace is calculated not to kill militarism but to enthrone it. . . We cannot celebrate peace when soldiers are fighting all round the world and in want of a home. It is a mockery”.

The national Peace Day celebrations were on Saturday 19 July 1919 but several schools also marked the occasion on 18 July.

At Potter Heigham celebrations were a village affair. A sports day was held for all ages which included a “Walking for old age pensioners” and races for men who had served. (NRO, PC 18/40). In Sporle, a Peace Tea was held for the men of the village.

School timetables were also altered. The logbook for Cockley Cley school records “Timetable not strictly kept. Children preparing for Peace Day” (NRO, C/ED 2/21). A similar account was recorded for Swafield school, “Did not keep strictly to the Time Table this afternoon. From playtime we practised the songs etc for tomorrow’s Peace Celebration” (NRO, C/ED 2/37).

On 25 July 1919, the Norfolk Chronicle and Norfolk Gazetteer had three full pages dedicated to “How Norfolk Celebrated Peace”. Some featured in later editions.

Throughout 1919 newspapers continued to report on demobilisation, medals being awarded, cases of murder and bigamy related to soldiers returning home, rationing and the growing employment issues. One headline in the Norwich Mercury read “Dearth of teachers. Should women be employed?” (1 November 1919).

War memorials were being planned across the county and some were years in the planning. On 24 October 1919 the Norfolk Chronicle and Norfolk Gazetteer reported: “Cromer war memorial. Another public meeting approves the crucifix design. Opposition defeated by overwhelming majority. An appeal for unity rejected”.

The call to commemorate Armistice Day came from the King. On 7 November 1919, only four days before the day, he issued a message to the nation, calling for two minutes silence on the appointed hour.

“Armistice Day. The King’s Message. To all my people. Tuesday next, November 11th, is the first anniversary of the Armistice which stayed the worldwide carnage of the four preceding years and marked the victory of Right and Freedom. I believe that my people in every part of the Empire fervently wish to perpetuate the memory of that Great Deliverance and of those who laid down their lives to achieve it”.

Armistice Day was originally the day of the anniversary. In 1919 this fell on a Tuesday. The move to Armistice Sunday, being the Sunday nearest to the anniversary, came in 1921. This was also when the symbolic poppy was introduced. Postwick church makes no reference to any commemoration in 1919 but does record a special service in 1920 when “ex service men attended in good numbers”. Its first reference to “Armistice Sunday” is in 1921 which is when the national commemoration appears. (NRO, PD 22/12).

Special service forms were introduced and set out the familiar format for the Remembrance Day we know today. 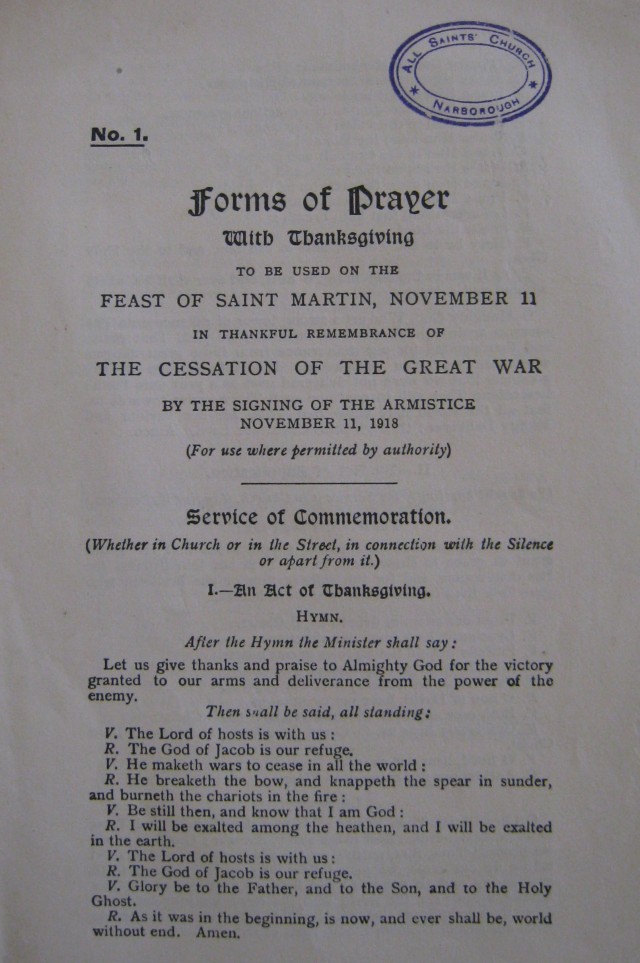 School log books vary in their detail but it is likely that all Headteachers took up the call from the King. At Great Fransham “Rev J Fletcher visited the school just before eleven o’clock & talked to the children. Two minutes silence to commemorate Peace”. (NRO, C/ED 2/11).

Reymerston school did not refer specifically to Armistice Day until 1921 when the school opened with the National Anthem and a war hymn and “the Revd C H Winter came in to speak to the chrn about Armistice Day” and the two minutes silence was observed. (NRO, C/ED 2/41).

At the end of October 1919 schools closed for Peace Week.

Armistice Day was widely reported in the press. A letter in the Norfolk Chronicle and Norfolk Gazetteer referred to the event as “The Great Silence” (14 November 1919).
At Diss School “the school war memorial was displayed in a conspicuous position in order to help the boys to concentrate their minds upon those who had fallen”. In Eye a smoking concert was held in the evening. (Diss Express 14 November 1919).
In Great Yarmouth sirens sounded both on land and offshore in preparation for the two minutes silence. (Yarmouth Independent 15 November 1919).
In Norwich it was a “memorable two minutes . . . In all the schools the King’s wish was observed . . . In the streets vehicles came to a standstill and pedestrians paused and bowed their heads”. (Norwich Mercury 15 November 1919).

The Eastern Daily Press also reported on the burial of the unknown warrior in Westminster Abbey and the unveiling of the Cenotaph in Whitehall. (12 November 1919).

The two minutes of silence in 1919 reflected on the ‘the war to end all wars’. Sadly, that was not the case.

2 Responses to THE GREAT SILENCE.