The City of Norwich, and its forward-thinking Treasurer, Mr A.J. Barnard, were pioneers in the application of computer technology to the work of UK local authorities and businesses. In 1953-4, Mr Barnard and his team began looking for an electronic system to handle its rates and payroll. They began discussions with Elliott Brothers of London in 1955, and the City Council ordered the first Elliott 405 computer from them in January 1956. It was delivered to Norwich City Hall in February 1957 and became operational in April 1957. The event was celebrated by a demonstration of the machine in front of the Lord Mayor of Norwich and the press on 3 April 1957. 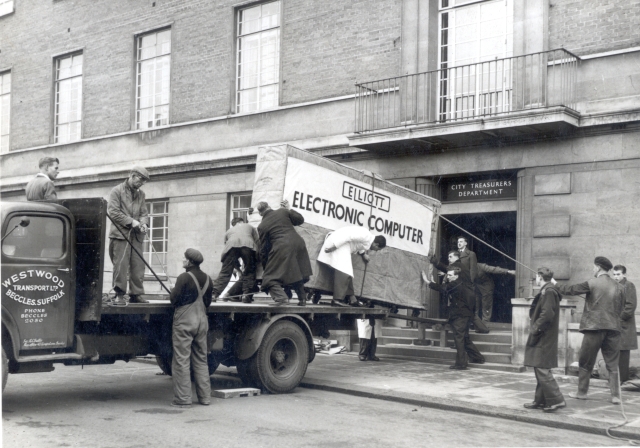 The firm of Elliott Brothers was formed in London in 1801, and made scientific apparatus. The company diversified into control systems, and during the second world war established a research laboratory at Borehamwood in Hertfordshire to carry out development work for the Navy. It was here that their first computers were built, following on from their work on real-time digital control for naval guns.

The first production machines were the 400 series, starting in 1955, and Elliott subsequently developed the 800 series, forerunner to many of the world’s computer designs. The Elliott 405 was a general business machine featuring bulk storage on magnetic film and other features designed for commercial data processing. Elliott Automation (as it later became) merged with English Electric in 1967, and the following year its assets were acquired by GEC (the General Electric Company Ltd).

The Norwich computer attracted a good deal of interest, throughout the UK and beyond. Mr Barnard was invited to present a paper on the Norwich experience to the British Computer Society in November 1957, and a version of this was published in The Computer Journal in 1958 as ‘The First Year with a Business Computer’.

In the article, Mr Barnard, who served as City Treasurer from 1953 to 1974, reflected on the performance of the computer and the progress and mistakes made in the first year of operation. He remained in demand as a speaker at conferences on computers for many years afterwards, and he is commemorated in the street name Barnard Road at Bowthorpe.

This entry was posted in Snapshots from the Archive and tagged A.J. Barnard, business computers, Elliott Brothers, Norwich Computer. Bookmark the permalink.

3 Responses to The Norwich Computer, 1957