The Witches of Lynn

It’s strange how one thing leads to another. When I was researching the French POWs in King’s Lynn, I came across Devil’s Alley, where the warehouse that was used for temporary accommodation was situated. This led on to the legend of Devil’s Alley- related in the King’s Lynn All Saints Church website:

“It is said that the devil’s hoof print is to be seen in Devil’s Alley off Nelson Street in Kings Lynn. The devil arrived by ship to the town, and disembarked to steal some souls, but he was spotted by a priest who drove him away with prayers and a dousing with holy water. The infuriated devil stamped his hoof with anger so hard that he left his imprint.”

The Devil was all too real back in those days- people believed he was a physical entity who chased souls and with whom certain people- witches- could communicate. The Witchfinder General didn’t just exist in Hammer horror films. For 14 terrifying months he ran amok throughout East Anglia at considerable profit to himself “clearing towns of witches”, and indeed was invited to King’s Lynn to do just that.

It seems that, once he had reduced his victims to complete submission with techniques we now call sleep deprivation and water boarding, he asked when it was that the “witch” first communicated with the Devil.

The frenzy for witch hunting really began in the reign of James I, who apparently came into contact with it in Germany, but fear of witches had been rife decades before then- as witness the legend of the witch’s heart at number 17 Tuesday Market Place. The Market Place had long been a place for public execution, and the story goes that one witch who was burned alive in 1590 was Margaret Read. At the moment of death, her heart burst from her body, struck the wall, leaving the mark still to be seen today, then, with an energy all its own, bounced its way to the river, presumably via Page Stair Street, and plunged into the river, causing it to froth and boil.

Margaret Read was an actual person, and details can be found in the St Margaret parish register (NRO, PD 39/1). There are two possible candidates. One was baptised there on March 25th 1568.

This would have made her 22 in 1590. Most witches seem to have been old women, though not exclusively so, as witness the stories of the Witches of Salem, and of Pendle Hill. The other candidate was Margaret Hammond, who married Thomas Read at St Margaret on April 8th, 1562 (PD 39/2).

From researching my own family at the Norfolk Heritage Centre in the Forum in Norwich, my impression is that in those days, marriage generally happened around the age of 20, so in 1590, Margaret Hammond-Read would have been around 48 or 50, which perhaps makes her a more likely witch.

In his History of the Borough of King’s Lynn, Henry Hillen has something to say about witchcraft in general and about Matthew Hopkins. He also names a number of other witches who were executed in the 1590s. 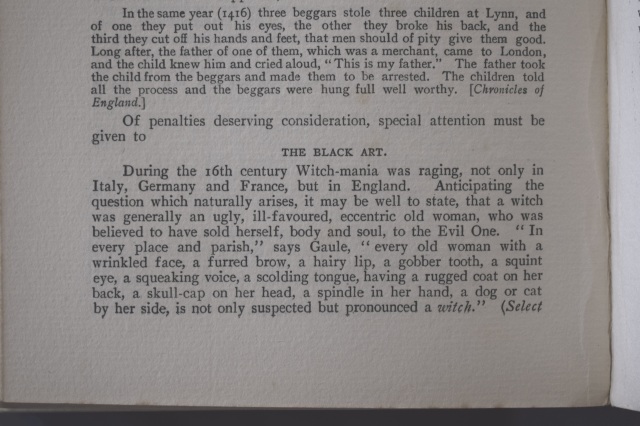 Extract from History of the Borough of King’s Lynn, by Henry Hillen, p848

But to return to the Witchfinder General- Matthew Hopkins began his career in Manningtree, Essex, and at a time when the average worker’s daily pay was 2 pence, he was paid £23 to cleanse the town of Chelmsford of evil, including the inevitable torturings and burnings. One of his techniques was to use a pricker to test whether bite marks, scars or nipples were immune to pain, as they were reputed to be after suckling the Devil. The pricker was a three inch spike which was plunged into the victim, who of course, felt no pain, and the pricker left their flesh not having drawn blood, which was further proof. Hardly surprising, as the instrument was something like the plastic dagger I had as a child, where the blade was spring-mounted and retracted into the handle under pressure.

As indicated above, on 11th May 1646, Alderman Thomas Revitt was delegated to approach Hopkins, and there is a transcript of “Extracts from King’s Lynn Borough records relating to Matthew Hopkins’ visit to Lynn in 1646 “

The Chamberlain’s Account of 1645-6 (KLBA, KL/C39/102) contains two entries under the heading ‘Gifts and extraordinary Charges’, for expenses of sending messengers to Matthew Hopkins. 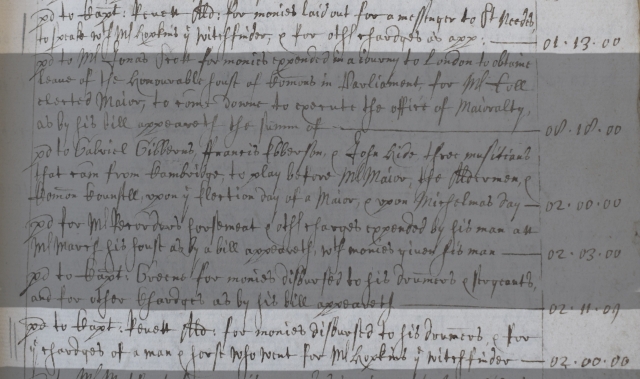 Though later in September it was ordered that he was paid £20 “for his pains and in full discharge of his demands”:

There is a book in the Archive the minutes from the Quarter Sessions where the charges against those accused of witchcraft were heard (KLBA, KL/C 21/2).

There is an entry for each of the accused, a list of witnesses, several of whom, along with Hopkins himself, seem to be giving evidence against more than one of the accused- of which more shortly- and the verdict.

Grace Wright was found guilty, and she was hanged in 1646.

Thomas Dempster, Cicily Taylor, Dorothy Griffin, Katherine Banks and Emma Godfrey were all found not guilty, while the trial of Lidiah Browne was postponed, as she was, unsurprisingly given Hopkins’ methods, “not of sound mind”.

In his History, Hillen also reports that Dorothy Lee was also hanged in 1646, and Dorothy Floyd or Lloyd in 1650- both due to the efforts of the Witchfinder. He also has a couple of other interesting facts to share. Going back to my point that a number of people seem to have given evidence against several of the accused, one is tempted to think that certain people considered themselves able to recognise witches. On page 848, Hillen mentions “the wonderfully omniscient Mrs Sparrow, who could not only detect those who had recently purloined goods, but point out the person who bewitched cows”. Was this a person of extrasensory talents, or someone with a grudge against the neighbours?

In spite of being paid handsomely by the town, though, the Witchfinder does not seem to have been very successful in King’s Lynn. If we look at the figures, seven people were brought before the court, but only one was found guilty. Apart from one who could not enter a pleas due to insanity, the rest were declared not guilty.

Vincent Price did much better!

7 Responses to The Witches of Lynn