‘I had never imagined the ear-splitting noise’: A Norwich girl’s experience of the Baedeker Raids

The Record Office has a number of vivid accounts from people caught up in the Baedeker raids, such as that of Betty Jacques (later Betty Crouch), who was sleeping in Norwich Training College in College Road the night that it was bombed, exactly seventy-five years ago tonight. She recalled:

The sirens sounded at just past eleven and shortly the raids began. There were anti-aircraft guns in Heigham Park on the Avenues and although I had seen them under camouflage netting I had never imagined the ear-splitting noise they would make in action.  Soon College was hit by incendiaries.  We had a beautiful chapel which blazed quickly as did our science laboratory which contained much woodwork.  We forty girls were in the corridor between these infernos….

We went on to the recreation ground and into an air raid shelter.  It was like a large rabbit burrow with wooden forms against the walls. Pit props held up a planked wooden ceiling.  The heavy thud of bombs falling nearby caused soil to drip through the gaps in the planks.  Miss Duff called the register and asked if we had any injuries.  She had a first aid box.  We were all present and amazingly unhurt.  I have to own up that all our knees were knocking and we felt clammy cold…. It suddenly dawned on me that eight months paperwork was gone for ever as well as my new shoes, dress and coat, which I had hoarded coupons and money to buy.  The noise of bombing faded and at 1.15 the all clear sounded.  We left the shelter and were marshalled into a crocodile to walk to a rest centre on Colman Road, still in our nightwear and slippers.  We passed small groups of people who either wept at the sight of us or waved miniature Union Jacks and cheered us on.

At the rest centre there were more tears at the sight of us from the white-coated ladies who gave us each a very large mug of very sweet cocoa and a huge doorstep of bread overspilling with golden syrup. I presume all the sweetness was an antidote for shock.  We were given a grey army blanket to wrap ourselves and we lay on the classroom floors, hopefully to sleep. 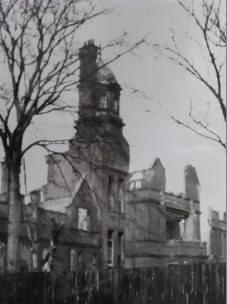 Norwich Training College after the Baedeker raids. The shell of the chapel can be seen in the foreground of one of the pictures. Norfolk Record Office, KHC 133B.

Norwich Training College after the Baedeker raids. The shell of the chapel can be seen in the foreground of one of the pictures. Norfolk Record Office, KHC 133B.

Betty’s parents lived at Aylsham and on the next day she got a lift there with her uncle:

In less than an hour I was home, being hugged by my Mother and Father. They had watched Norwich burning from Aylsham Market Place.  And, having two daughters living in Norwich, wondered if they would survive the Norwich inferno.  Cousin Bill had checked that my sister Angela was safe after a traumatic night in her Aunt’s house in Essex Street.  They had an Anderson shelter in the garden.  When they came out, the chimney stack was on Angela’s bed, half the roof was missing, there was no glass in the windows and no front or back door.  I remember weeping over my brand-new coat, lost in the fire and mother said, ‘We can always buy you another coat, but not another You!’. Norfolk Record Office, KHC 115.

The Record Office has other descriptions of the nights of the Baedeker raids, including recordings made in 2012, the seventieth anniversary. There must still be many people living in Norwich who have recollection of the raids, either their own experiences as children, or stories told to them by their parents and other relatives.  The Record Office would love to hear from you of such memories: otherwise they will be lost for ever.

This entry was posted in Snapshots from the Archive and tagged bombing raids, norwich, Second World War, WW2. Bookmark the permalink.

4 Responses to ‘I had never imagined the ear-splitting noise’: A Norwich girl’s experience of the Baedeker Raids