Exploits on the Grand Tour

With the weather still cold and wet people are starting to think about their summer holiday. Many picturing warm sandy beaches and relaxing evenings.

200 years ago many of the middle classes were enjoying their first experiences of travelling abroad, by setting off on the Grand Tour. The tour incorporated stops in some of the most desirable locations in Europe, including Paris, Rome, Venice, and Naples and lasted up to 2 years. Many of their diaries and letters home have ended up at the Norfolk Record Office.

One of the last stops on many people’s tour was Italy. Getting into Italy involved a lengthy process, with the tourists having to decide whether to risk crossing the Alps or go via the Mediterranean route. Earlier tourists tended to cross the Alps by the Mount Cenis pass, arriving at Susa before navigating their way to Turin. To make their way across, tourists had to dismantle their carriages which were then carried on mules while they themselves were carried over on sedan-like chairs. As tricky as this already sounds a further difficulty could arise in the form of the weather.

‘At the foot of this celebrated mountain I was given to understand that the passage across was attended with great difficulty and danger; that the cold would be extreme, the weather being then very indifferent and the first snow having fallen the preceding night – that it would be much better for me to be carried over. Six men therefore were provided for this task. It rained when I set off. You could not have resisted laughing to see what a figure I cut, sitting in a little arm chair upon two poles carried by two men, enveloped in the stoutest suit of cloth I had, my thunder and lightning great coat over that and Mr Reed’s wrapper over all. A pair of boots and 2 pair of worsted stockings for my legs; my white travelling cap and a hat over that for my head. The ascent is about 3 English miles and very steep. I could not but be surprised to see with what surprising agility the men, alternately relieving and assisting each other, performed with ease what would have demolished the rest of the world. The first cloud passed, I took compassion on the poor creatures and finding it neither so dangerous or cold as I was made to believe I quitted my great chair for a mule’s back and threw off my great coat and one hat’.

Once at the top, tourists were able to take a break, before starting the descent.

‘This plain is surrounded with still higher mountains ever covered with snow. The post house, a hospital, many shepherd’s huts and near the descent an inn called the Great Cross, which divides Savoy from Piedmont, are the only buildings; In this last place I stopped to taste a trout and refresh my carriers. Again I seated myself in the chair and was conveyed down in 2 hours, the decent is reckoned 6 miles’. 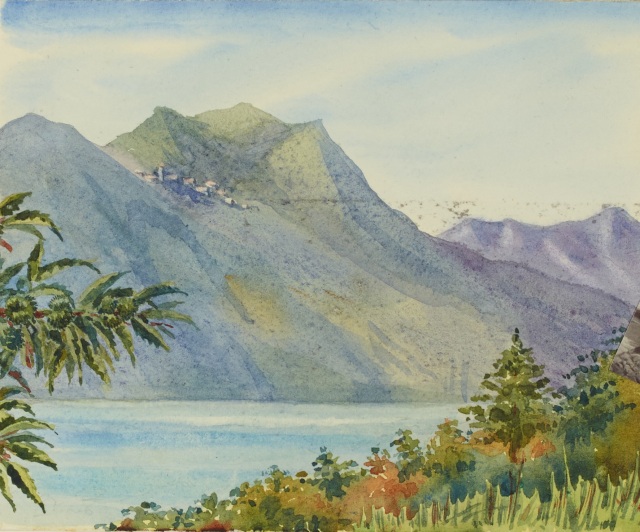 Once safely into Italy the tourists had many sites they were able to visit. The area around Naples was popular particularly after the discoveries of Herculaneum in 1738 and Pompeii in 1748, two Roman towns buried by the eruption of Vesuvius. Many people also visited Vesuvius itself.

M Derbishire records her trip to Vesuvius in 1788 describing the scene one night from the balcony of her lodgings (NRO, DCN 118/6). ‘I had the pleasure of seeing the fire come out of the crater and run a considerable way down the side of the mountain… there were little burning particles in the sea, like glow worms’.

Despite the larva flow the group decided to climb Vesuvius. At the top of the mountain (but not the crater) ‘we sat down to eat some hard eggs we had brought with us during which, a throw from the crater sprinkled us and our provisions with little cinders. The waiter trembled for fear and advised us to go down immediately. We did not take his advice, but proceeded, this part is nothing but immense pieces of cinders, but very hard. When we got to the top, an amassing thick smoke from the crater with a strong sulphurous smell almost stifled us. We held our handkerchiefs to our mouths and covered our eyes, but still it got down my throat so much and made me cough, that I began to be in great agony and set off to go down. The smoke was so thick that I could not see one of the company though I heard them talk very distinctly. In about 5 minutes the smoke cleared and I went again on the opposite side to the wind and was highly gratified. When I saw into the crater there was no opening, the smoke issued from three different parts. The edge was as sharp as if cut with a knife. The bottom appeared only about 50 feet deep. We found the situation very warm, our dog who went with us, cried terribly and Morgan was obliged to hold him in his arms. The sulphur made him so sick that he vomited. A little lower down we saw a large mouth out of which came a hot sulphurous steam but not like that at the top which was like mustard in ones throat, or that sort of thing. Our ciceroni [guide] went down a little way to bring up some beautiful things which were encrusted upon the stones. They were very like cauliflowers and some tinged with yellow and brown. We were much distressed as we found the poor man could not get up again. He was frightened as he found he could not hold himself much longer. We made, therefore, a collection of handkerchiefs and tying them altogether made a string long enough to pull the man up.’

Getting down was much easier

‘We did not look what time it took us to get down but it appeared very short as I stuck my heels in the sand and slipped a yard of two at a time. I got, however, several falls by not being able to stop myself when running. My hands and wrists were scratched but my feet came off very well. ‘Mrs Twiss lost both her heels and almost all the sole. Of course, her feet suffered extremely and were bruised and cut a good deal’’.

It seems that early tourists were more than willing to put themselves in danger in order to see something more unusual.