Did your ancestors marry by licence? 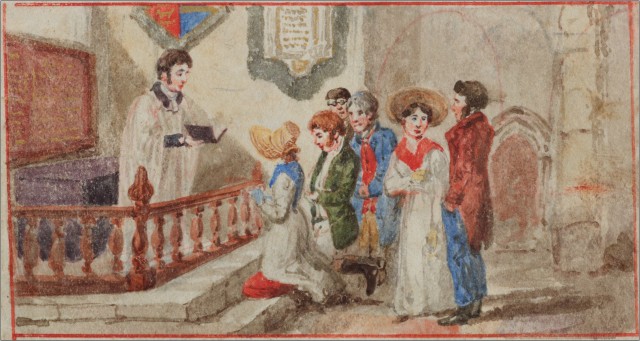 Illustration of a wedding at Topcroft, Norfolk. NRO, BT, ANF. 1828.

If you are researching your family tree and have come across an entry in a parish register which notes that your ancestors married by licence, then marriage licence bonds can be a valuable resource.  Although they do not include marriages by banns, the bonds cover a whole archdeaconry, or diocese, rather a single parish.  This can make them useful for tracing marriages of some ancestors if you do not know where the wedding took place.

A recent project at the Norfolk Record Office has made accessing some of these marriage licence bonds much easier than before!  For over a year, a group of 20 volunteers and staff have been busy indexing the Archdeaconry of Norwich marriage licence bonds, 1712-1915.  Over 20,000 records have been added to our catalogue, NROCAT, as part of the project.  The Norwich Archdeaconry bonds cover the main population centres in Norwich, Great Yarmouth, King’s Lynn and Thetford.  We also hold bonds for the Norfolk Archdeaconry and for the Norwich Consistory Court but these have not been fully indexed yet.

After Lord Hardwicke’s Marriage Act, 1753 (which clamped down on clandestine or secret and irregular marriages) there are several reasons why a marriage could take place by licence.  If one of the parties was a minor (under 21 years old) they needed parental consent to marry and had to apply for a licence.  Couples who chose to marry in a church other than their home parishes usually required one as well.

Licences were often favoured if the parties wanted to marry quickly (some were issued as late as the day of the marriage) or if a couple wanted to avoid the publicity of having banns read in church.  Perhaps it was a shotgun wedding, a second marriage, or the groom was a military man who had just disembarked from his ship at Great Yarmouth and needed to marry before he returned to sea. Non-conformists might choose to marry by licence in preference to having banns read in the Parish Church.

A marriage licence bond contained three parts.  The affidavit was a sworn statement, usually made by the bridegroom, stating that there was no legal impediment to the marriage.  The groom and a bondsman (often a relative or friend) entered into a bond agreeing that they would forfeit a sum of money if the marriage did not take place.  This penalty sum was set deliberately high to deter improper marriages.  The court which issued the licence kept the bond and affidavit and the applicant presented the marriage licence to the clergyman who was to marry the couple.  It is rare for the actual licence to survive.

You can view our holdings of the Norwich Archdeaconry marriage licence bonds through our online catalogue, NROCAT (http://nrocat.norfolk.gov.uk).  Their main reference number is ANW 24 and you can search by the names of the marriage parties and by parish.  Please note that images of the documents themselves are not on NROCAT.

There really is a story behind every marriage licence bond, and look out for future blog posts that show some of our favourite examples from the Norwich Archdeaconry records.

This entry was posted in Snapshots from the Archive and tagged marriage, marriage licence bonds, volunteers. Bookmark the permalink.

1 Response to Did your ancestors marry by licence?